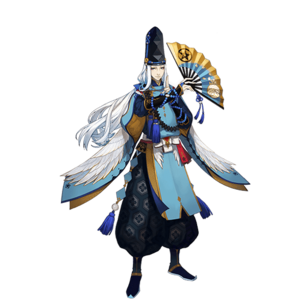 An exorcist in traditional clothing

The elven woman smiles kindly before muttering a few words and making a few hand gestures. With a benevolent wave of her sword, she releases the foul being back into the afterlife.

A half-orc with shining rules along his body brutally crushes the head of a fiend before looking at its friends. A smile full of teeth creases his face before he gestures for them to come forth.

Pensively looking at the stack of papers, an old dwarf mutters under his breath with a book in his hand. Lights spring to life around him as heis frown deepens, sensing that there is evil about.

All of these are exorcists, and each one makes use of their heavenly guardian's power to channel their abilities into the world. More than simply a guardian angel, this entity is the source of their divine power, and none share that being's power apart from the chosen exorcist.

Some may have a figure from history as their heavenly guardian, while others inherit a being of great strength such as a long-dead dragon, celestial, or fiend. Regardless, all of these are used to remove impurities from the world at the guidance of the exorcist.

Power from Without, Strength from Within

Exorcists can be found throughout the land, often working to cleanse townsfolk of evil and to remove coming calamities by cutting them off at the source. However, not all exorcists are good; some use the power from the heavenly guardian for less moral ends, whether it be to gain wealth, power, or to indulge in their own excesses. Regardless, each exorcist works to make their way in the world and to ensure that none get in their way.

Regardless of where they might come from or what their purpose might be, all exorcists in the end seek to remove something from the world. For some it might be the impurities that sometimes creep into the world in the form of possessing fiends or strange maladies, while others simply seek to excise the obstacles in their way, even allowing a portion of the impurities into their bodies in order to obtain their goal.

When creating an exorcist character, think about how your character came into contact with their heavenly guardian. Many exorcists are unaware of the source of their power, while some have seen them in dreams, or even manifested right before their eyes.

Next, think upon why your character chose to use the powers, and what made them start adventuring. Was it the need to remove evil from the world after having seen their village burn down around them? Was it the call from a nobleman and the promise of money if only the exorcist would exorcise some demonic influence upon their family? Or did your strange powers cause you to simply be evicted from where you grew up?

You can quickly make an exorcist by following these suggestions. First, put your highest ability score in Strength or Dexterity, followed by Wisdom. Second, choose the acolyte background.

As a Exorcist, you gain the following class features.

You start with the following equipment, in addition to the equipment granted by your background:

Incantations remain active (unless noted otherwise) until you choose to end them at the beginning of your turn, and their cost must be paid at the end of your turn as normal. You start encounters with no incantations active.

As an exorcist, your knowledge of spells and rituals is vast in order to allow you to drive forth evil from a place, allowing you to fill a book with rituals both spiritual and arcane. While this book is in your hand, you may cast any ritual spells you have detailed within it. Choose one of the following classes: cleric, warlock, or wizard. Choose two 1st-level spells which have the ritual tag from the chosen class's spell list. These two spells are detailed in your ritual book, and you can cast them as ritual spells using your Wisdom where applicable.

If you come across a spell in written form, such as a magical spell scroll or a wizard's spellbook, you might be able to add it to your ritual book. The spell must be on the spell list for the class you chose, the spell's level can be no higher than half your level (rounded up), and it must have the ritual tag. The process of copying the spell into your ritual book takes 2 hours per level of the spell, and costs 50 gp per level. The cost represents material components you expend as you experiment with the spell to master it, as well as the fine inks you need to record it.

At 2nd level, you understand how to banish enemies that would inhabit your allies. As an action, you may allow an ally who is being possessed by a creature (such as the possession ability of a ghost) to make the same saving throw they originally made to resist being possessed, at the original DC. Should the saving throw succeed, the being is expelled to an unoccupied adjacent square of your choice and the possession ends. You may use this ability up to a number of times equal to your Wisdom modifier. You regain the uses of this ability when you finish a short rest.

By 2nd level, your senses become much more attuned to the presence of possessing creatures. As an action, you can open your awareness to detect such forces. Until the end of your next turn, you know the location of any creature that is affected by an ability you could allow an additional save against with your Excise Possessor ability within 60 feet of you that is not behind total cover. You can use this feature a number of times equal to 1 + your Wisdom modifier. When you finish a long rest, you regain all expended uses.

As you reach 3rd level, you choose an aspect that decides the way you fight the abberations that possess those around you. Choose one of the following aspects: Aspect of Armament, Aspect of Impurity, or Aspect of Lore, all detailed at the end of the class description. Your aspect grants you features at 3rd level, and again at 9th, 15th level.

At 5th level, your chanting speed increases, allowing you to activate an incantation as a bonus action.

When you reach 7th level, you learn how to create ofuda, thin strips of parchment that hold power that reacts negatively to your enemies. Upon completing a long rest, you may spend 15 minutes creating a number of ofuda equal to your Wisdom modifier, and empowering them with your energy through the use of calligrapher's supplies. These ofuda remain viable until you use them or finish a long rest at the end of which they become harmless pieces of parchment.

As an action, you may throw one of these ofuda as a thrown weapon attack with a 60' maximum range with no range increment. On a hit, that enemy takes 1d6 points of radiant damage for every level you possess in this class. Regardless of whether the attack hits or not, after being thrown, an ofuda becomes a nonmagical, harmless piece of parchment.

At 10th level, you react with lightning speed when an enemy attempts to disturb the purity of you or your allies. As a reaction when an ally would fail a saving throw against an effect, you may allow that ally to reroll that saving throw. You regain the use of this ability when you finish a short rest. You gain an additional use of this ability per short rest upon reaching 18th level.

At 11th level, your chanting speed increases even further, allowing you to activate two incantations whenever you would normally activate a single incantation.

At 14th level your swiftness in removing possession increases, allowing you to activate your Excise Possessor feature as a reaction, instead of an action.

By 17th level your mastery over incantations has grown to the point where you learn how to maintain one without requiring you to spend any of your own power. Choose one incantation you know. It always affects you at any level you choose it to be active at (even at the start of an encounter), and it costs you one less rune point to maintain per turn (to a minimum of 0).

For example, if you choose Soaring Legs of the Phoenix, you could choose to have it active at its first level at the start of an encounter at no cost in rune points, or even at its fourth level with a cost of 3 instead of 4 rune points per turn.

Beginning at 20th level, your mastery over exorcisms has grown to the point where you can remove even yourself from the flow of time. You can cast time stop once without expending a spell slot. You regain the ability to cast this spell when you complete a long rest.

Incantations are at the core of an exorcist's power. The following are a list of incantations that you can activate, though none can be activated more than once per action (regardless of whether it is an action or bonus action). An upgrade to an incantation can only be activated if the previous version of it is active, and requires an additional rune point spent at the end of your turn.

Incantations that replicate the effect of spells use your Wisdom modifier for the purpose of that spells' effects. Some incantations require you to possess a certain level in this class in order to activate, as detailed below.

You are under the effect of the heroism spell.

You have resistance to damage on the first time you would be damaged after the end of your turn.

You have resistance to all damage.

You gain +2 to your saving throws.

You have advantage on the first saving throw you make after the end of your turn.

You have advantage on saving throws.

Enemies you hit cannot use their reaction to make opportunity attacks until the start of your next turn.

You gain proficiency with acrobatics and althletics checks. If you already had proficiency in these, you instead double your proficiency bonus.

You have advantage on all acrobatics and athletics checks.

Dance of the Hazy Lotus Flower

Increase your AC by 2.

The first time you would be attacked after the end of your turn, that attack is made at disadvantage.

Enemies have disadvantage when attacking you.

Eyes of the Oracle

You gain a +1 bonus on weapon attack rolls.

Your first weapon attack each turn is made with advantage.

You have advantage on weapon attacks.

Soaring Legs of the Phoenix

Increase your speed by 10'.

Increase your speed by an additional 10'.

Increase your speed by an additional 10'.

You are able to fly at your speed. When this incantation ends, you are affected by the feather fall spell.

You deal an additional point of damage on weapon attacks.

You deal an additional 1d4 points of damage on weapon attacks. This effect replaces the first level effect.

You deal an additional 1d8 points of damage on weapon attacks. This effect replaces the second level effect.

You deal an additional 2d6 points of damage on weapon attacks. This effect replaces the third level effect.

When using the attack action, you may attack an additional time when making a melee weapon attack. This does not stack with the Extra Attack feature.

You can make one melee weapon attack as a bonus action.

When using the attack action, you may attack an additional time when making a melee weapon attack.

As an exorcist, you are immutably tied to the spiritual. However, not all exorcists fight the same way; while some are steeped within the knowledge of the ages, familiarizing themselves with countless chants with which to repel their foes, others equip enchanted weapons to aid them in their fight. Finally, and perhaps the darkest path, are those who are tainted with the impurity which they fight, and attempt to use it to heighten their strength.