Ilyodyne is a greater deity of love, justice and war. She is a frequent patron for arcane casters, paladins and those who seek love and affection.

Ilyodyne was born as the lone daughter of a powerful God of War, who ruled a pantheon with his many many sons. She was of minor note, a deity of caring, love and magic in a pantheon focusing on strength and prowess. Despite this she was seen as a valorous individual, who much like her warriors brothers and father, never faltered. She was so trusted by her father that she was charged with defending the Sacred City and Castle as he and her brothers would fight in a long-forgotten war. Neither the great God of War or his sons survived the conflict, annihilating both side of the conflict.

As the last God standing, Ilyodyne took it upon herself to bring her father's vision to the world. Albeit a vision filled with compassion and love. 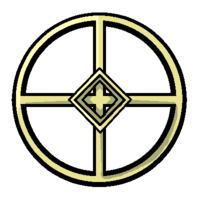 Despite being a Goddess of Love, Ilyodyne is noted for a somewhat modest appearance. Despite being born into a family of War Gods, she was born meek and fragile. The heavy greatsword meant for her was never used, as a sad twist of fate. However she was beloved by her father and mother and trained in the magical art. She appears as a tall and thin woman, with grey short hairs, a long hooded robes hemmed with gold and jewelry and a great golden staff. She tend to be timid, rarely showing herself in her true form, preferring various avatar with appearances fitting a Goddess of Love.

Ilyodyne is primarily a Goddess of Love before everything else, thus her dogma focus on affection and compassion. Ilyodyne encourage free love among individuals but also celebrate exclusivity and dedication. She believe that individuals are allowed to love no matter their gender, race or caste and that love prevail over all. Her dogma in in relation to love and sexuality can be described as very 'liberated', encouraging individuals to seek affection and pleasures, as long as doing do not hurt anyone else.

While she teach compassion, as a Goddess of War she understand that sometimes conflict is inevitable and that some individuals cannot be redeemed and must be punished for their crimes. That said, most of her teaching regarding justice are through a lens of compassion and understanding. While the wickedness must be punished, any injustice suffered must also be addressed. Her dogma focus on rehabilitation when possible, especially for individuals who acted for their survival or in response to a great injustice.

Ilyodyne choose a champion every few generations, always a young woman, to bring forth justice and love to the world. She tend to choose a mighty individual, both in body and mind. The champion is tasked with bringing forth love and justice through the world, all the while using strength wisely.

The servants of Ilyodyne tend to dress in great robes, carrying staves and sheathed bladed weapons. The Goddess Ilyodyne is oftentimes a sponsor of Paladins (both normal and Paladin of Freedoms), although her approach to justice tend to be less strict than similar deities. Her priest and priestess have little in the way of hierarchy, the common priest is called a deacon and serve under an archdeacon. Her holy warrior and paladins often bear the title of bishop, and otherwise follow the hierarchy of their orders. There is little to no central figure in the religion save for the Champion, who herself hold little authority beyond respect.

Ilyodyne's temple varies in size and shape, some are built more like houses with large worship areas and plenty of living spaces. All the while she possess grand temples, with marble columns and grand halls with opulent altars. There is one thing in common with her houses of worship, they lack any statues of her, instead prominently displaying her holy symbols.

The temples of Ilyodyne grant many services, such as marriage, birth, funerals and community centers. One of the most unique service is granted to soldiers who visit the temple, giving them a locket to place a picture or a lock of hairs of a loved one within. The temples offer holy symbols and holy water at no profit and serve food and drinks to the needy and travelers at no cost.

Ilyodyne use to belong to a pantheon of mighty Gods of War, herself even carrying the mantle of war. However the pantheon was wiped out far in the past, leaving her as the only remaining deity.