Impale: Whenever an opponent fails a save against Control Body, Ronen uses his psicrystal/mindblade to move itself to strike with an Assimilate power, this causes the blade to turn black in color. Moving at speed 50 this performs like a Coup de' Grace.

Psionic Powers: (ML 21) Unique Abilities/Day: 9. All Psion Discipline Powers up to and including 8th level are known and committed to Ronen's repertoire. Powers gained through level progression are below.* Powers made permanent for Ronen through Incarnate.

Repletion (Su): Ronen does not need to eat or drink.

Resilience (Su): As an immediate action, Ronen can reduce the damage he is about to take by 4 points for every 1 power point spent.

Resistance (Su): As an immediate action, an elan can spend 1 power point to gain a +6 racial bonus on saving throws until the beginning of his next turn.

Ronen fights defensively and since he has 14 ranks in the Tumble skill, he receives a +3 dodge bonus instead of +2. 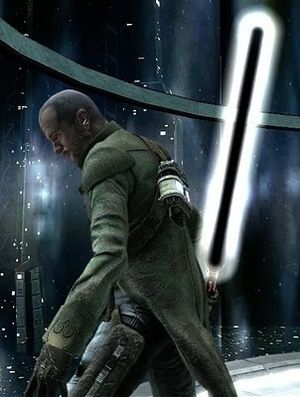 Ronen became an Elan in the ancient Talaire Empire about a century before the Tribulation, as he calls it, which was also referred to as the Enemy in (Complete Psionics). He had been studying electromagnetic energies in astronomy and predicted that their home world would pass through the tail of a comet in less than a century and global chaos possibly an extinction level event could occur. His colleagues and society mocked and blacklisted him. So he devoted his family's fortune to engineering an interstellar craft over the next 50 years. Also during that time, Ronen procured two codices that represented the comprehensive history of Talaire and its customs. Ronen launched once the spacecraft was completed and just months before the scheduled arrival. Upon the arrival of Nimbus in their solar system, it's beautiful coma awed and dazed the people across all of Talaron. He watched the awestruck through remote viewing until sometime on the eighth day massive earthquakes shook the planet which resulted in continental tsunamis instantly wiping away coastal cities and hundreds of miles inward. He watched from space as the planet entered the tail and the electrical storms that the ensued. The lightning was so massive that entire flooded regions on the planet's surface were scorched and cooked dry. Then the most dreadful thing happened, Ronen witnessed a coronal mass ejection from the Talaron home star that once the comet touched the shockwave a colossal bolt of lightning arced out and destroyed not only the comet but the entire planet of Talaron as well. He now roams the cosmos searching for planets inhabited with humans. While cloaked he lands on the planet near a populated area and observes the area through remote viewing to get details on daily customs and fashions. Afterwards, he poses as a traveler who is seeking information in exchange for payment. The payment he offers unknowingly to the potential recipient is a Pearl, Mind Seed (his own creation DC 33). He then leaves the encounter and returns onboard his ship and watches his seeded target take control of the region and potentially the planet. His solace in life is watching the rebuilding of a new culture rooted in Tal'Aariic heritage. Here is where you can insert this NPC into your campaign. A level progression is given so you can maximize efficiency and not have to design a new vilian or ally.