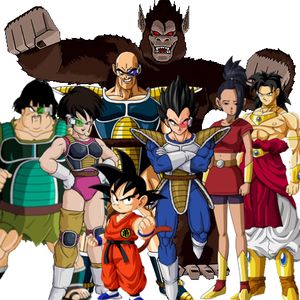 An extraterrestrial race of primates. Saiyans are a naturally ruthless and aggressive warrior race who strive to be the strongest in the universe, and who have a lycanthropic-like transformation.

The Saiyans (sometimes referred to as Saiya-jin) are a somewhat primitive, but brutal and powerful warrior race. They aspire to bring chaos, competition, and violence into the universe instinctively. They display an enjoyment for fighting and challenging opponents during battle, generally against anyone who wants to fight them; the stronger their opponent, the more excited the Saiyan is to fight. Saiyans are always happiest when training or in combat. The average Saiyan is mostly only interested in their own physical prowess in combat. But other Saiyans who are not as physically inclined instead have interests in being in political power, or maybe in control of an army. Saiyans love the thrill of battle and are very aggressive with generally short tempers. Saiyans that were raised by their own generally act as outlined above and are very, very prideful, some so much so that it blinds them to accepting help or even helping others.

They also tend to completely lack any sympathetic emotions, even towards each other and sometimes even their offspring or family. If a Saiyan shows weakness, his or her comrades will show no remorse in disposing of the weakling. However, this is generally not the case with Saiyans raised outside of the Saiyan society. Saiyans do sometimes end up being close to team members, since they have proven their strength to one another in battle, an almost brothers-in-arms relationship. Most all Saiyans believe the 'weak' should rightfully perish while the strong survive. Sometimes Saiyans that are raised with a race other than their own can be more like the race they grew up with and have only minor personality traits of their heratige.

Saiyans are an extremly competitve militant race that lives for war, fighting, and power. As such, Saiyans may want to fight particularly powerful monsters that they come across or are exposed to, in order to test their own strength. This does not dictate that the Saiyan insists on fighting alone or is suicidal, merely that the strong desire exists within the character to want to fight the strong creature to see how strong it is and if he can beat it. Beating the monster as a party still counts as the Saiyan having successfully conquered the opponent for this purpose, though it is not unheard of or even uncommon for some more prideful Saiyans to want to fight alone.

For the most part, Saiyans look frighteningly human, and are unable to be distinguished from humans except by their wild hair and tails. They also have a larger, more muscular build than most humans. Saiyans generally stand between 5 and 6 feet tall and weigh between 110 to 225 pounds, with males typically taller and heavier than females. A Saiyan's hair never changes length or style once it has fully grown, although this is not the case with Saiyan hybrids like Half-Saiyans.

Two of the most prominent physical features on a Saiyan are their wild and tall jet-black hair, and their brown furry monkey-like tail. Their black hair spikes out in numerous random directions, and while it is astronomically rare for two unrelated Saiyans to randomly have the same hair style, the child of a Saiyan may on occasion have a hair pattern that resembles or is identical to one of the parents. Saiyans have predominately black eyes with dark black hair and eye brows. A Saiyans skin is any range of pale to olive brown.

All Saiyans possess a monkey-like tail in appearance which is covered in exclusively brownish fur. A Saiyan's tail is packed full of sensitive nerves and connects directly to the spinal column. and is a particularly sensitive area for Saiyans; because of this, Saiyans are extremely protective of their tails, and it is usually kept around the waist in a belt-like position to make it harder to grab. The tail is fully prehensile, meaning that it can be used to grasp, hold, and manipulate small or smaller objects. So a Saiyan could, for example, wrap the middle of their tail around the neck of a potion bottle and then use the remainder of the tip of the tail to uncork the bottle. The tail could even be used to lift up a person weighing no more than their tail's maximum load by the wrist or scruff of their clothing, or even in making a sleight of hand check for pick-pocketing.

The tail is also the exclusive location in a Saiyan's body for a gland that allows for the use of the Oozaru transformation. Blutz waves are an energy source emitted by large celestial bodies such as a full-moon when they reflect rays of sunlight. When a Saiyan absorbs at least 17 million zenos (a unit used to measure waves of full celestial light) of blutz waves through the retina (which takes 2 full rounds), a bio-chemical reaction occurs in the Saiyan's tail that causes them to transform.

All Saiyans love to eat, and will regularly consume more than their own body weight in food in just one sitting whenever possible. Despite this fact, an overweight Saiyan is an obscurely rare sight indeed. Saiyans are more then averagely strong and very tough and healthy. Young Saiyans age at the same rate as Humans and reach adulthood at age 15, but once they reach their prime, a Saiyan's body slows down aging, and a Saiyan can typically live up to 250 years old. Some Saiyans speculate that the reason for a Saiyan's decelerated aging is due to their continuous evolution; the warrior blood in their bodies keeps them younger and fit so they can fight longer.

The Saiyans usually get along best with any member of any race that can appreciate their fighting abilities or their love of war. But when that isn't the case, the most often friends of a Saiyan are Dwarves or Half-orcs, but rarely both. Ones who enjoy the company of Half-Orcs tend to like them because they like to test their strength and skills against Half-Orcs who are both big, strong, and more than willing to go outside for a scuffle. Those who get along better with Dwarves are usually those who seek power or riches, because the enjoyment of gems and riches is something that they and a Dwarf have in common. Some Saiyans also like Dwarves because of their love of warfare and find that as a common interest to start a friendship as well. They get along well with any Gnome, Halfling, or Human that can prove themselves to be strong. Saiyans feel mixed about Elves; although they admire the Elves' skills with sword and bow, and are not hostile to Elves, things that Elves tend to enjoy, such as fine art, poetry, and games of intelligence or swordplay, are generally lost on the mostly uncultured Saiyans.

Because Saiyans value freedom and don't like to be chained down by either rules or traditions, they more often than not are chaotic. Saiyans are rarely good, more often seeking neutrality, doing whatever suits them best in a given situation. An evil Saiyan is a dime-a-dozen. Rarely, however, some do favor good, and chaotic good Saiyans are not at all unheard of. These Saiyans are often ridiculed on their home world and are considered 'weak' for having kindness and compassion. Other alignments, while rare, are possible for Saiyans. Saiyans in general that are raised on their home world and with their people have a tendency to lean away from good alignments, usually being chaotic neutral or chaotic evil. Any Saiyan raised outside of Saiyan society is more likely to have a variation in alignment, although this variation comes on the good-evil axis more often than the law-chaos axis.

The planet Vegeta is the homeworld of the Saiyans, and this is where the bulk of their race lives. They have no specific lands of their own on the material plane, but are most commonly found on the outskirts of Human lands and settlements. On other occasions, some Saiyans much more rarely will settle in a Dwarven or Half-orc community. Other Saiyans just stay on the move and have no connection to a home of any type.

A Saiyan has no chief racial deity, but many revere the Legend of their race that says that once every one thousand years, a Super Saiyan is born. The story goes that one day a Saiyan Warrior would push the physical limits and transform into a superior individual. This fearsome being, a Super Saiyan, would wield exceptionally colossal power. It is a legend that is handed down from generation to generation, but no one knows for sure. As far as worshiping actual deities, many who want to worship a deity find themselves drawn to the more war- or conflict-oriented dieties of their alignment. Some examples include; Kord (god of strength), Erythnul (god of slaughter), Heironeous (god of valor), St. Cuthbert (god of retribution), or even Hextor (god of tyranny).

Saiyans have no language of their own. Instead, all Saiyans learn Common or whatever language they are brought up with.

A Saiyan is given a name at birth, and Saiyan names generally have 2-3 syllables and at least one 'ah' or 'o' sound in them. They are always play-offs of names of vegetables. (Vegeta-Vegetable, Kakarotto-Carrot, Raditz-Radish, Broly-Broccoli, Paragus-Asparagus, Toma-Tomato, etc.)

Saiyans can adventure for lots of different reasons. Primarily, Saiyans who are focused on self-development will adventure to face new challenges and try to better themselves. Other Saiyans will adventure to amass wealth or riches, and sometimes a Saiyan adventures as a way to see the rest of the world.

A Saiyan's tail can be removed by anyone with a slashing weapon making an attack roll against the tail. Saiyans may wear the tail around their waist for an additional +10 bonus to AC against attack rolls made against their tails. Saiyans who lose their tail immediately lose their racial skill bonuses, their Oozaru alternate form ability, and take a −4 penalty on Balance, Climb, Jump, Move Silently, Swim, and Tumble checks for that day. The penalty is reduced by 1 at the end of each following day. Tails can be restored by Regenerate, Limited Wish, Wish, or Miracle spells, or they can regrow naturally. See the regrowth table below.

So, for example: Lucian, a 5th-level Saiyan, fights an Eight-Headed Hydra, which is a CR 7 monster, and gets brought down to −5 hit points, but is saved by his allies. After being restored to full health (either by rest or magic), Lucian would gain experience equal to his hit dice (5) multiplied by the 5 hit points that he was below 0, and then multiplied by 10, which would look like this: 5 (for HD) × 5 (hp below 0) = 25 × 10 = 250. So Lucian would gain an immediate 250 experience points upon reaching full health.

A Saiyan still dies at −10 hit points like any other character would. A Saiyan who dies as normal and is then resurrected does not gain a zenkai bonus or any other benefits, regardless of what spell is used to restore them.

Click here to get more information on how this transformation works and for diplomacy checks to help control an Oozaru. A Saiyan raised among other Saiyans knows of this form and what happens during a full moon, most Saiyans generally keep good track of when the next full moon is, and may go to bed early so that they won't change during the night, that is; unless they intend to change.