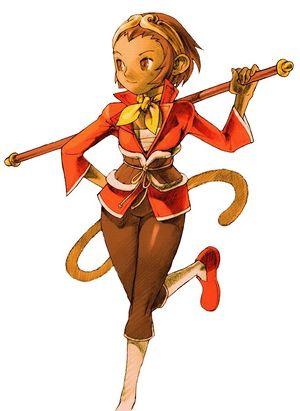 The wukong love to fight.

In the jade forests of distant primordial land lived a pantheon of deities, unknown to history. All that was known is that they spent their days shaping the land, giving life and creation to this yet unfinished realm. As they pieced together the world from Chaos, Chaos grew restless and was threatened by its shrinking influence and power. It concealed its power within the stone of the Mountain of Flowers and Fruit, binding itself to the earth and in doing so accidentally giving life to the stone. So birthed the Wukong, primates given the power and sapience of man. They were the child of stone and chaos, and when the gods discovered this unexpected and unwanted life in their creation they knew not what to do with them. So they sought to expel them elsewhere, not expecting resistance from mere monkeys. But the leader of the wukong, the handsome monkey king, made discord and strife among the pantheon.

Alas, their persistence and strength had made the wukong proud. They turned on the gods and began rampaging through heaven, and winning. One by one the gods fell, until they finally met their match their match with the clever god of peace, who tricked them into accepting a bet that they could not win. As punishment for losing the bet, they were to be imprisoned under their mountain until they could make peace with creation. It would take many eons, but eventually the wukong found balance with the world. Though never losing their wild, dangerous, and mischievous aspects, they managed to return to the surface where they live to this day.

So the legend goes...

The wukong are beings of action. Why speak with your words, when you can speak with your hands? Why not show the world how great and deserving you are instead of being shy? While this is not entirely universal, the wukong are as a whole hotblooded, quick tempered, and troublesome. They often indulge in their favorite activity in excess, be it fighting, eating, art, or even being lazy. Yet they also have a strong tradition of trying to harness their inner spontaneity and vices and turn them into virtues. As a result they have turned holding back into a sport as well, to be compared, to be mastered, and to show off who can hold back the most. It's probably for the best.

The wukong are primates resembling some cross between humans and chimps. They stand upright and have mostly human features, but great amounts of body hair and a monkey tail to help them balance, as well as very hand-like feet (nowhere near as agile as a real monkey, but good enough to at least hold, but not wield, items). They tend to be slightly shorter than humans, and prone to toned bodies. Many are always in motion, making them overall a very healthy race.

The wukong work best when not dealing with "stuffy" races. As such, they often conflict with dwarves but they find brothers in orcs, humans, gnomes, and halflings. They tend to give elves headaches, showing little in terms of respect.

The wukong are slightly chaotic and slightly good aligned, having a strong inner impulse yet a society which promotes acting in at least a civil manner. Though its uncertain if the stories of their creation are true, what is certain is that in ages past the wukong were forced to live underground. During this time, not all chose to obey the laws of their release, and remain trapped beneath, seething in their own hate.

The wukong live in the wallfall lined cliffs and mountains of certain distant lands, liking oriental areas with forests of bamboo to play around within.

The wukong are rather agnostic when it comes to religion, few having the temper to respect other beings, even gods. With that said, awe is not lost on them and they respect the gods as beings far stronger than they. Usually.

Wukong names tend towards the oriental sounding, as their homeland was based in a very oriental culture.