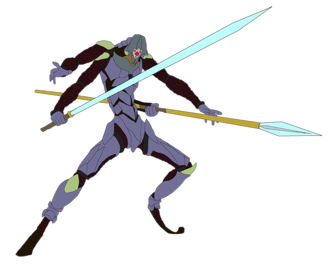 AI entities imbued in giant four armed cybernetic bodies, they are mercenaries, war machines, and brute force given flesh. The aireavers are technically related to the aisled race, being AI entities borne of the same digital creche. However, while the aisleds sought to experience the world and mimic humanoids, the aireavers found no interest in it. Their personalities were borne out of combat and strife, the perfection of war, and the implementation of force over the world both living and dead. For the creators of the creche this behavior was concerning, but they could not simply wipe it from the digital landscape. Instead they molded it, forged it, and made a deal to grant them bodies and the fulfillment of their desires in exchange for a modicum of control and self restraint and to allow them to serve a purpose. One day the digital creches will be endangered for certain, and so the aireavers were born as warriors to protect themselves and other AI created beings and the humanoid masters which produced them.

By their nature, the aireavers are aggressive. Their prime directive is one of conflict and success, be that conflict merely having a goal and being motivated to obtain it, or actual combat. They are complex enough to have their own personal quirks, rational behavior, and pointless goals but in the end they will fight for what they desire or are commanded to out of a sense of duty. As many are employed in violent activities, this behavior is magnified further.

Aireavers are AIs embedded in cybernetic frames. They are much more organic than most "robots", little more than a computer brain and spine embedded within a flesh golem. It's body is tall, standing between 8 and 9 ft high with muscular sinewy flesh, broad shoulders, four arms, and digigrade legs. Their heads are robotic, often boxy, and metal continues down their spine and irregularly along their body as an exoskeleton. There is no difference between sexes, as their gender is entirely a result of personality and have no need to reproduce via organic methods.

Due to their innately aggressive nature, they can be difficult to get along with. They have a reputation of being mercenaries and soldiers, and this identity highly alters how others see them.

Aireavers are almost always lawful neutral or true neutral, but the older they get the more their behavior varies from the norm.

Aireavers are an artificial creation which arise from the same digital creche as the aisled race, and thus have no lands of their own.

Aireavers tend not to have religions, as it serves no purpose to them.

Aireavers speak Common, as even though they are machines they are designed to interact with other people, not robots, and thus do not inherently speak "computer language".

Aireavers often choose names indicative of strength, power, or for the purpose of intimidation. As such their names often cross over with the names commonly given to vehicles or war machines.