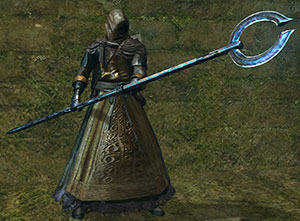 A prospective priest of the Old Gods wielding an Annulus.

Some of the most mysterious artifacts spread across the lands are known as the Annuli. Each of these staves has a unique appearance, but they all terminate in a large ring-shaped head. Ancient tales suggest that strange beings from beyond the stars may peer through the hole into our world, but that's just paranoid delusion. Even so, students of the occult search high and low for these illustrious treasures, in attempts to uncover their secrets.

An Annulus is a long staff roughly 7 and a half feet tall that ends in a single, large ring with an open gap at the top. The center of the ring is roughly 18 inches across, and under certain plays of light the atmosphere within that empty space seems to faintly distort, as if something lives within the opening. Unbeknownst to most, there are many Annuli scattered around the world, and they are all unique existences that predate the current Age of the world.

In truth, an Annulus is a self-contained portal to the Deep Cosmos, its essence inexorably linked to a specific Old God. Through the Annulus, the Old God in question can peer into the mortal world, and even transmit whispers, thoughts and images to any who attempt to wield the staff. It is through these eldritch foci that the Old Gods maintain agency onto the mortal realm, and use their otherworldly influence to draw hopefuls to them. In those terms, it is perhaps best to think of the Annulus as the staff intended for a high priest of the Old Gods.

To a normal person, the Annulus is a harmless tool, and apart from perhaps conveying a sense of unease, it is incapable of exerting influence on the unaware. Even in its dormant state however, the annulus counts as a +1 long halberd that deals bludgeoning damage and slightly increases mental defense in a way that is usually imperceptible. The Annulus also deals an additional 1d6 points of pure magical damage that isn't reduced by any resistance or immunity to energy. Only creatures that are resistant to mindbreak take 2 less points of magical damage per point of additional madness they can accumulate before incurring mindbreak. Creatures that are immune to mindbreak or that have no Intelligence score take only the physical damage.

To creatures that have a dark insight score however, the Annulus is a source of both great power and danger. Even with a dark insight score of 0, one can hear whispers and see flashes of thought originating from the Annulus. Just wielding the annulus alone is enough to gain dark insight, as the dark mutterings and flashes of otherworldly sight imbue the wielder with otherworldly knowledge. The gain is slow at first, but the more knowledge one gleans from the Annulus, the quicker the flow of understanding becomes, and the deeper one's mind will delve within the Deep Cosmos.

The more the wielder of the Annulus delves into the occult mysteries of the Old Gods, the more attuned he becomes to it. Affinity represents the wielder's connection to the Annulus, the rapport between the wielder and the Old God behind the Annulus, and the amount of power he ultimately can draw from it. Affinity towards the Annulus also determines how much influence the Old God can exert upon the world using the wielder as a conduit. Bear in mind that the entity behind every Annulus has the power to make and unmake worlds, and has very much a will and agenda of its own. Wielders that further the agenda of the Old Gods are well cared for and rewarded with great power, while wielders that resist the will of the Old Gods may end up having their minds broken beyond repair. With even the slightest bit of affinity to the Annulus, eldritch mutterings from the Deep Cosmos will worm its way into the wielder's brain, conferring unique understanding of the world beyond the world we know.

Increasing Affinity with the Annulus is done through a measure of occult study and furthering the aims of the Old God behind it. While obtaining the first level of Affinity is as easy as having a dark insight score, subsequent levels require a large amount of physical and mental effort. In general, increasing Affinity is done by performing actions in line with the Old God's agenda, or more specifically, tasks given to the wielder by the Annulus itself. These tasks can be as simple as retrieving an item or reading some specific occult tome, or as hard as slaying servants of opposing Old Gods. Because raising affinity with the Annulus involves lots of exposure to eldritch dangers and oftentimes the possibility of retribution for failure or disobedience, few to no prospective high priests will survive the ascension with their minds intact. Awarding affinity to the Annulus should be left up to DM discretion.

When the wielder of an Annulus knowingly performs an action that disobeys or resists the will of the Old God or that is diametrically opposed to the Old God's agenda, he immediately incurs an amount of madness equal to his Affinity level. Since the resistance to mindbreak granted by the Annulus (see table above) is the product of the Old God shielding the mind of its servant from other eldritch dangers, the wielder does not incur the benefits of this resistance when he offends, disobeys or otherwise spurns the Old God behind his Annulus.

Since there are many Old Gods and the Annulus belonging to each is unique, no two Annuli are the same. However, the structure of powers granted to the wielder is similar for every Annulus. Save DCs for abilities that aren't spells are 10 + your Affinity level + the bonus of your highest mental ability score.

Elder Magic (Su): Using the Annulus as a catalyst, you become capable of channeling some of the magic of the Old Gods. This so-called elder magic is different from ordinary arcane and divine spells, predating the creation of the Cosmology of New Gods and modern magic alike, and its power stems from the warped plane. Elder magic has a 0% miss chance on the warped plane, and cannot be restrained by dispelling or antimagic originating from the real world unless the caster attempting such also has 0% miss chance on the warped plane.

Every Annulus gives access to nine tiers of elder magic, consisting of three spells each. Each tier corresponds to spell level and to the wielder's Affinity level; to cast a 7th level Elder spell, you must have 7th level Affinity. Elder spells use the highest of your mental ability scores to determine saves and spells per day. You standardly have 1 base spell slot for Elder spells per level. You gain your Affinity level as a bonus to your casting ability score for the purpose of determining extra Elder spell slots per day. Your effective caster level for casting Elder Magic is equal to your character level.

Elder Gaze (Su): You release a bolt of raw magical power as an attack action. The bolt has a maximum range of 10 feet plus another 10 feet per per Affinity level. The Elder Gaze is a ranged attack that deals base damage equal to the added magical damage of the Annulus (up to 6d6 points at Affinity level 9, see table above), and is further increased by 1½ times your highest mental ability bonus and the Annulus' enhancement bonus. The attack roll may use either Dexterity or your highest mental ability bonus, whichever is higher. You may make a full attack action with the Elder Gaze if your base attack bonus is sufficient. Like the base damage of the Annulus, the Elder gaze can be partially or fully resisted if a creature has resistance or immunity to mindbreak.

While the Annulus is awakened, you may focus the Elder Gaze in a 100-foot sweep (see primeval dragons) that deals 4d6 points of damage per Affinity level (Reflex half).

Becoming (Ex): When reaching an Affinity level of 9, the Annulus is absorbed within your body, becoming a part of you. This counts as a partial apotheosis of sorts, giving your body the properties of a Deep Cosmic denizen. You become a creature associated with dark insight and the warped plane, gain bonuses to detection checks against creatures with a dark insight score and become capable of identifying them by scent. You no longer need to make checks to interact with the warped plane and gain a +4 racial bonus to all ability scores that stacks with any racial bonus you already possess. You ignore the first point of madness from any source.

You no longer need to bring out or hold the Annulus to cast Elder Magic, and can release the Elder Gaze from your own eyes. Furthermore, any natural weapons and weapons you wield gain the additional magical damage belonging to the Annulus inside of you.

You may manifest the Annulus inside of you in your hand or put it away at will as a free action. You still need to materialize the Annulus in order to use Awakening or Elder Mysteries.

Awaken (Ex): Using the very dark insight you have accumulated as payment, you compel the Old God behind the Annulus to 'awaken' to the world. Within the empty ring of the Annulus, a large, glowing sphere opens in the shape of a grotesque, distorted eye. Centered upon the opened eye the surrounding atmosphere seems to draw inward like a vortex that seems to tug at one's body and sanity alike, creating an intense pull and a maddening sensation in the surrounding area.

While awakened, the Annulus projects a window to the Old God effect centered upon the opened eye. The radius of the pull is equal to 10 feet plus an additional 10 feet per level of Affinity you have (max. 100 feet), and the damage per round for being within 10 feet of the awakened Annulus is 1d6 points plus another 1d6 points per Affinity level (max. 10d6). You are immune to the effect and may choose to exclude your allies as well.

The Annulus drains 1 point of dark insight every round while it remains awakened, and you and everything within the radius of the pull fully transitions into the warped plane. While Awakened, all Elder magic is effectively heightened by 2 levels, and you gain access to the Elder Mysteries.

For as long as the Annulus is awakened, you gain the effects of the foresight spell, effective caster level equal to 11 + your Affinity level.