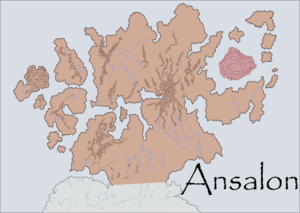 Ansalon is a continent on Krynn, the world of the Dragonlance setting.

The continent of Ansalon is approximately 1,300 miles from east to west, and 900 north to south. It is in the southern hemisphere of Krynn.

Before the Cataclysm, an event precipitated by the Kingpriest of Istar, Ansalon was a solid land mass. Great plains ran from Silvanesti and Balifor in the east to Ergoth in the west. In addition, the Blood Sea used to be fertile lands, which were farmed and which made the now decimated city of Istar prosperous.

The Cataclysm changed everything. When the fiery mountain struck Krynn, it created the Blood Sea, separating the Minotaur Isles from the rest of the continent and plunging the plains of Istar far beneath the waves. The northern peninsula, near Kalaman, was forced up from the bottom of the ocean. Ergoth split into two separate isles, and the southern Ergothian and Solamnic plains became the New Sea.

The Chaos War scarred the land even further, and left thousands dead.

Ansalon is home to many races, including elves, humans, ogres, dragons, draconians, dwarves, and many others. For more information go to List of Dragonlance creatures.