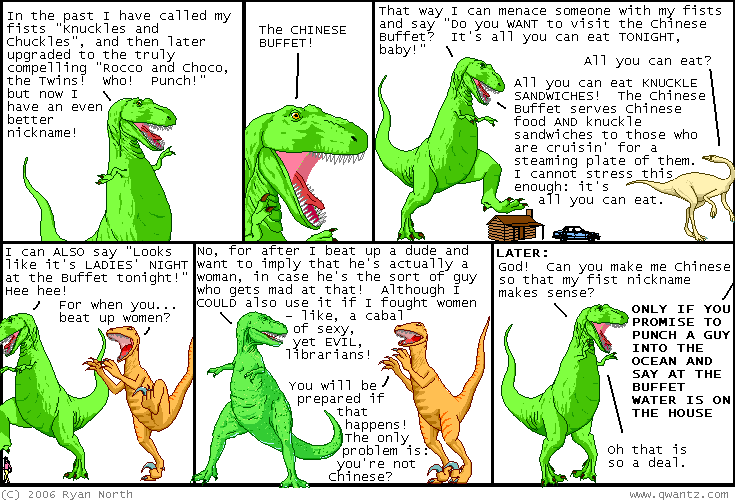 You are a dinosaur. As such, you jump on people and eat them.

You are also a martial artist. And water is always on the house!

When I make optimized builds, I don't plan on playing them (or to have them played for that matter). I take a set of constraints and try to make the best possible character I can with them. Here are the constraints I used to construct this character:

Specifically, the goal with this build was to create a swift hunter build that synergized nicely with the ranger wild shape variant.

In retrospect, however, this build would make a pretty fun character to play, so long as you start at level 10 (it really is sub-par before then). If you can convince your DM to ignore multiclass XP penalties, only take one Overwhelming Attack level and instead take an extra Scout level. You'll still have the same number of feats, but you'll get that last +1 AC from skirmish progression.

None. You have Vow of Poverty.

The build does not turn online until level 10 when you can turn into a Fleshraker Dinosaur (MM3).

First, you turn into a Fleshraker Dinosaur (MM3). Next you cast haste on yourself (if you want) and then, using some memorized spells from your spellbook (I assume this is legal with VoP, otherwise, use your buddy's spellbook), you swift cast wraith strike (or an extended wraith strike) before your pounce making a ton of powerful touch attacks.

If you don't kill your target, you should have enough ranks in concentration to swift cast another wraith strike defensively and pounce a different target. If there is only one target, you will have to evade for a round, unless the target is large enough that you can pounce to a different square (to trigger skirmish again).

Against flying targets, you can always memorize the fly spell. Otherwise, you have a large racial bonus to jump checks in dino form and you have tons of skill points as you level up, so you should be able to reach a nice jump check.

You can also memorize the burrow spell if needed (although that takes up one of your valuable 2nd level spell slots).

Thanks goes to Alex2 and BackHandOfFate who helped me refine the build!