Dag come very harsh mountain tribes. The environment is high in elevation, cold, and with limited resources. This have developed a warrior race that is very resilient and wise. If a man says he is not afraid of dying, he is either lying or he is a Dag.

Dag come from the mountains of Aralhal. Aralhal is the third planet in the Golbez System, is a savage world filled with giant mountains, wild plains, and unexplored canyons. There is a much smaller civilized presence on Aralhal due to it being protected by Aralhal. Aralhal has a much more savage weather, with regular hurricanes, tornados, earthquakes, and blizzards; one of which occurs on average each month. Additionally, global temperatures in the daylight on average are 40 degrees celsius, and 5 degrees at night. A full rotation of Aralhal (or a day and night) is 18 hours.

Aralhal is composed of more primitive cultures and dangerous monsters. Dags have mostly stuck to the high mountains, with settlements ranging from 8000-1200 feet above sea-level (some Dag come from even higher elevation). The land is colder than most, with constant harsh weather, and little plant life. However animal life is more common, with hides being a common export. The land is scarce on mineral resources. 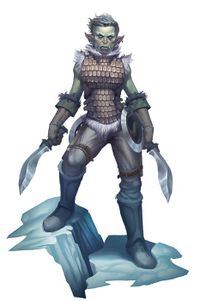 Born of a Harsh Land: The harsh cold environment with little air or life has benefited a short athletic build. Dags are short (height 3' 9" to 4' 6") and muscular (weight 90lbs to 130lbs). Men are slightly larger than woman. Their bodies are more muscularly dense, with extra muscle groups beyond normal humanoids. They have been known to fight creatures twice their size barehanded. However, with thick clothing their strength can be hidden.

Appearance: Their skin is olive brown, hairless and thicker, head hair is black and cut very short, men can grow facial hair which is usually trimmed. Their eyes range in hue from amber brown to black. Legs and arms are slightly longer proportionally to their bodies, their chests are wide, and they have square jaw-lines (including woman).

Body and Mind Empower Each Other: Dag constant training has conditioned their bodies to be weapons of war. At the beginning of each day (for roughly 30 minutes total), they typically physically train (focusing on aerobic and weapons), then meditate. Constant training and meditation has given them some psionic potential. Control over body and mind is unified, each strengthening the other.

Warrior Culture: Because of their harsh lands and limited resources Dag society is very war centered. Each Dag is judged based on how effective and resilient they are in battle. Dag society is highly competitive in the summer time. With regular sports matches to see who is best between the tribes. This not only improves their strength, but also unifies allied tribes. This Dag culture predisposes them to violence. Thus they do not live long. Death from old age is seen as dishonorable. However, they are very level-headed, willing to wait for the right opportunity to strike, and prone to training constantly.

Pragmatic Survivors: Due to winters that are especially bad, Dag depend on community and loyalty to survive them. This is also true for fellow warriors in battle, which a Dag will go out of his way to help. They do not act out of any good or evil intention, only a pragmatic value in survival. They value self-sufficiency and survival above all things. Thus no tribe should depend on another. All alliances are temporary, and built on mutual benefit. Should this change, it is no longer an alliance -- and any non-ally is technically an enemy. Dag culture is not slowed down by philosophic morality of right or wrong, only what benefits the tribe most (could be classified as Lawful Neutral or True Neutral).

Mercenaries: The legendary capability of Dag in war has made them sought after by other cultures as mercenaries. So much so, that Dag warriors have become a major commodity. Often a small group can change who wins a battle or war! Dag mercenaries can be found in any land, but usually in a group. They are hired as a squad (6), platoon (12) or company (40) -- by the axiom: Dag are stronger around other Dag. Dag mercenaries are extremely expensive, but are worth the price.

Language: All Dags learn Common and !Qai. !Qai is a secret language of clicks which only Dag and a few Rylvain know. !Qai is only a spoken language, and incorporates "clicks" before some words. This permits them to send secret messages and communicate in battle without alerting the enemy. More knowledgeable Dag may learn Dwarven, Gnome, Orc or Rylvain.

Allies: On their home world, Dags are allied and share trade routes with the much larger Rylvain. They have even been know to work together on hunts or in war. The two cultures benefit from each other, and exist in completely different niches of the planet (thus do not compete for resources); with the Rylvain preferring the valleys, while Dag prefer the mountains. However, when both ecosystems are threatened, they are quick to help each other. In fact the similarity in culture and physiology has lead some to speculate that they share a common ancestor.

Enemies: Dag are in active conflict with Elves, most Fey (including Elven Nymphs and Half-Nymphs), Giants (including Half-Giants) and Skandars. Elves and Fey they view as weak, and thus creatures to be trampled underfoot. Meanwhile, Giants and Skandars are competition, thus must be dealt with. However, they do have some respect for Giants and Skandar.

Others: As a general rule they get along with races that value earthly success and practical action over the magical or mystical. Thus Dag mostly get along with Dwarves, Orc and Ronso. But since they compete for resources, this is not always the case. However, with weaker races Dag have a superiority complex. They generally disregard the words of weak people. Viewing action as greater than words. This affect cuts both ways, and has lead to some races avoiding Dag.

When in Foreign Lands: They do see value in learning about a host culture, and will follow the law of the land when necessary. Further, since Dag have limited culture outside of war, most will want to learn all the strengths and weakness of their host culture. Dag will prefer to respect the wishes of their client if hired. This is a preference, not a mandate -- if things are no longer beneficial, a Dag will protect other Dag first.

Collaboration and Evolution of Article[edit]