This creature is loosely based on a monster from the Dragon Quest series of video games. 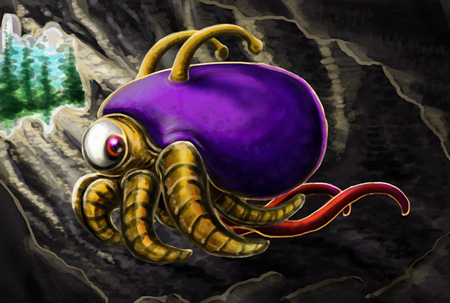 A druin waiting just inside a small cave.

Like some otherworldly amalgam of cricket and cycloptic octopus, the druin is a strange creature indeed. It sports one oversized human-like eye in place of a head or face. It's body is a purplish ovoid on which two feelers protrude from the top. The druin scurries about on eight to twelve striated legs (accounts of the exact number vary between specimens) that end in tapered points. A pair of longer, reddish limbs much like it's feelers dangle behind it from underneath. For a creature without tooth or claw, it posses as a surprisingly dangerous predator.

Druins are nightmarish creatures only partly existing within normal reality, composed of nightmarish thoughts given physical form. They haunt underground caves and labyrinths, scouring their habitats for their favorite foods, living flesh.

Often, a druin will wait up on a high ledge or other difficult to reach place, partly concealed so that it may ambush other creatures or make and escape if necessary. When confronting prey, a druin will attempt to slow it down and knock it unconscious with it's gaze before closing in to consume living flesh.

Druins, when left without an adequate food source for long periods of time, are given to wandering for sustenance, allowing them to occasionally be discovered under open sky at night.

Druins with established territory carve themselves burrows in which to hide with their Reality Rasps.