A group of alien beings hailing from the Ethereal Plane, but often making sojourns into the cosmos for knowledge. 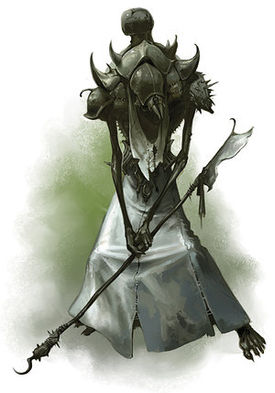 Hailing from the Ethereal Plane are a group that call themselves the khen-zai, but are more collectively known to others as the ethergaunts. Tall and emaciated beings, ethergaunts are a purely alien species that seek to purge themselves of all emotion. Their shrewd and scientific methods have led them to tremendous advances in arcane lore and technology, but also to spurning the gods themselves.

Ethergaunts have created and maintained a society built on the premises by which they live; stature is bestowed based on the extent to which an individual has purged themselves of useless emotions.

The life of an ethergaunt is one of constant study and introspection, with the intended goal being to eventually rid oneself of all emotion. Ethergaunts allegedly rank themselves based on their perceived progress in completing the latter task, but ranking is also based largely on arcane power and scholarly ability. For the most part, the purging of emotion is essentially a species-wide bluff; ethergaunts tend to possess such vices as greed and ambition in abundance. Pleasure, remorse, and happiness, however, are areas in which they are found extremely lacking.

The typical ethergaunt stands about 8 feet tall and resembles a horribly emaciated humanoid, with males averaging around 200 pounds and females around 180. Its neck juts out from its chest, creating a large hump where a human neck would be and resulting in a hunchbacked posture. An ethergaunt’s face is a mass of various sensory organs surrounding a lamprey maw, but is usually covered by a two part mask that gives it a vaguely humanoid shape. The tendrils that allow the ethergaunt to sense its surroundings snake out from behind the mask. The color of this mask and the ethergaunt’s other attire varies between red, white, and black. This color is indicative of their personal power and the extent to which they have fulfilled their goal of total ruthlessness, essentially cementing ethergaunt culture into a structured caste system. An ethergaunt with 1 to 7 HD is a red, 8-14 is powerful enough to don white, and ethergaunts of 15 or more HD are considered members of the all-powerful black caste.

A mask is essential to an ethergaunt's survival in almost any environment outside their home plane, but is compact enough to allow for the wearing of other headgear (although the effectiveness of this headgear may be mitigated by the presence of the mask, which effectively blinds the wearer unless they possess an alternate form of sensory detection).

In the grand scheme of things (which, to the perpetually scheming ethergaunts, is everything), other races are mere pawns that the ethergaunts may bend to their will. When dealing with ethergaunts, it would be prudent for opposite parties to remember that they are willing to plot against each other for personal gain. Ethergaunt treatment of outsiders makes their relations with each other appear cordial by comparison.

Many ethergaunts are lawful or, more commonly, neutral evil. They are willing to tread on any who resist their will (even other ethergaunts, if necessary) and the only laws actively enforced by their society are those intended to force the ethergaunts’ preferred lifestyle onto others. Even so, their rigid caste system and predisposition to logical, ordered study make them ill-suited towards chaos.

Ethergaunts have no legitimate land holdings of their own outside of the Ethereal Plane, only scattered pockets of researchers and scouts roaming the land, cataloging knowledge for presumably insidious purposes.

Even rogue ethergaunts wouldn’t dream of bending their knee to any deity. Religion (and the ideals of faith and passion that go with most of them) goes against every premise of ethergaunt society, and so they seek to destroy religion wherever they find it. To this end, they have developed armies of technologically augmented slaves with which to commit genocide upon any species they deem worthy of extinction (which is basically everything non-ethergaunt).

All ethergaunts 'speak' their native tongue Khen-zai, which is a silent form of communication conveyed by gesturing and movement of the ethergaunt’s head tendrils and can be understood as speech to any ethergaunts within normal speaking range. Even though non-ethergaunts could theoretically learn to understand Khen-zai, none can learn to speak it due to lacking the requisite anatomy. As such, most ethergaunts that serve as ambassadors for the collective also learn other languages.

Ethergaunts have no surnames, which would imply identification of a familial system and be construed as an outlet for emotion (and thusly a sign of weakness). Instead, they only have a given name and a suffix that follows the name, signifying their caste in accordance with their color.