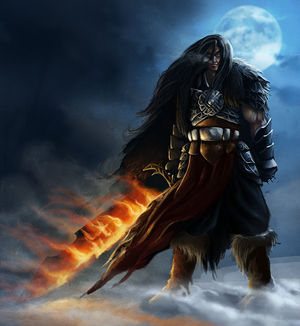 It’s not my fault I’m the biggest and the strongest. I don’t even exercise.

The frozen tundras of the North are called home by many tribes of large, but still human, barbarians. These tribesmen are often mistaken for and commonly attribute their heritage to the firbolgs.

A firbolg is a large humanoid creature distantly related to true giants. While large for humanoids, they are passable (if easy to pick out) in humanoid societies. In these times a firbolg is a natural soldier; its physical strength allows it to dominate a battlefield in a way few others can. Their variety also allows them to be versatile in their vocation, drawing upon their natural giant magic to get things done.

Firbolgs are a highly varied group given a universally bad rap by the worst of their kind. While some of them are greedy and rapacious raiders and bullies who live on terrorizing the fringes of society, others attempt to make an honest living. Even these are hard-pressed to deny their giant blood, however, and they find themselves drawn to the battlefield as mercenaries.

Firbolgs are large and brutish specimens that stretch the limits of Medium size. Approximately seven feet in height, they at first appear to be extraordinarily tall humans, strapped with a tremendous amount of muscle that evinces their status as giants and not normal humanoids. In all other respects, they would normally appear to mirror humans in their range of skin tones and capabilities.

Firbolgs are often ostracized from lands that are not their own; most people don’t make doors to accommodate creatures of their size, and are loathe to trust the kin of those who make their living as brigands.

Most firbolgs keep to their own, which is usually more limited to their close kin than the whole species. Firbolgs from a different group are just after the same things; if they’re around they are likely going to target the same people. They settle these differences they way they know best; bloody conflict between two or more groups of firbolgs is even more common than violence against their raiding victims. That may be because the victims have the sense not to fight back, which the firbolgs usually lack.

Firbolgs don’t tend to be the nicest of folk, but they aren’t all total douche bags either. They don’t lean towards any particular alignment.

Firbolgs are nomadic, populating the sparse tundras far north where other races cannot survive. They keep their numbers small to cut down on their food needs, but they rarely do this out of concern for others. Firbolgs know they are bigger and stronger than most things they are likely to meet should they venture south, and whatever they need they usually take. This includes living space, should their numbers get too high to continue their preferred lifestyle. Firbolgs encountered elsewhere are typically renegades, having left their unit for whatever reason and found employ somewhere else.