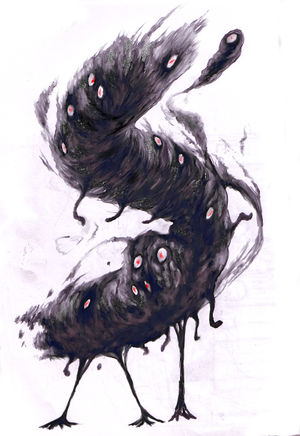 The howling winds serve as a warning to those delving the darkness below.

You hear a terrible howl like a furious wind as an amorphous, ever-changing blob of cancerous flesh appears before you, tendrils appearing, stretching, and vanishing in an instant. They're covered with dozens of twitching eyes, gaping mouths, and odd growths. The hideous beast moves towards you, massive five-toed footprints being pressed into the ground underneath.

Flying polyps are bizarre extradimensional aliens who arrived 750 million years ago in great black basalt stone ships. In ancient past they dominated the planet, forming large cities of basalt towers and spreading over the surface, until they came into conflict with an ocean-dwelling species which eventually drove them into deep underground wells, which were sealed up imprisoning the polyps forever. Or, so they hoped. As time passed, the flying polyps eventually escaped their confines and exterminated their enemies, only to return to the wells which had become their new homes. Now they lurk deep under the earth, territorial and alien in thought, a danger to any who would open their tombs.

Flying polyps appear as flying masses of twitching exotic matter covered in eyes, mouths, and dangling tentacles. Their bodies shift form, growing, splitting, changing, and sometimes vanishing altogether suggesting they do not exist completely within our mere 3 dimensions. In spite of their eyes, flying polyps are blind and have no concept of light, instead sensing their surroundings through unnatural air currents which constantly swirl around their being. A howling distinctive wind surrounds them always, allowing creatures to hear them even if they cannot be seen. They attack with blasts of desiccating hot wind, and tentacles which seem to phase through matter. Strange five-toed footprints are sometime left on the ground beneath their bodies as they move.

Flying polyps are intelligent but possess such alien minds and thoughts that their motives and language is impossible to understand. They seem to possess a telepathy between each other, but otherwise do not speak nor respond to any attempts at speaking with them, even with magic. They change size rapidly but average around 20 feet tall. Their weight is also variable, but the difficulty pushing one indicates they are much larger than their average 32,000 lb weight suggests.

Flying polyps start battle at range, using blasts of wind and spell-like abilities whenever possible and relying on their semi-ethereal state to act as their defenses. If opponents can prove to hit it, it moves into melee to either take attacks of opportunity on ranged attackers, or flurry with tentacles on melee attackers, especially those in heavy armor. They have infinite DR against non-magical weapons, making them difficult to damage by conventional means.

Bio-Energy (Ex): As xenotheric creatures, flying polyps have a bio-energy pool equal to 3 + their constitution modifier. They can use this bio-energy on their genetic engineering ability and various xenotheric feats. It recharges at a rate of 1 point per minute, unless it is bio-energy burn. Bio-energy burn is restored after 8 hours of rest.

Control Atmosphere (Su): Flying polyps have unusual control over the weather and can create powerful storms. By expending 1 point of bio-energy it can duplicate the effects of control weather except the casting time is a standard action, the range is 1 mile, the weather can be of any type even if it does not fit the terrain, the weather manifests immediately, and the duration is 1 round. As a free action a flying polyp can extend the duration by expending a bio-energy each round to maintain it. Other flying polyps can even assume control of a control atmosphere attempt and expend bio-energy points to keep the weather system going. Once the instance of control atmosphere is not being fed bio-energy points it ends immediately.

Extradimensional Body (Ex): A flying polyp is not of this world. It is always under the effect of blink but suffers no miss chance to its own attacks. In addition, it's attacks count as both ghost touch weapons and brilliant energy, allowing it to phase through armor and ignore armor and shield bonuses (but not armor and shield bonuses from force effects, nor other AC bonuses).

Heavy Mass (Ex): A flying polyp is unusually dense and counts as a creature one size larger for the purposes of being moved such as by bull rushing or spells. In addition it is never negatively affected by wind effects.

Howling Wind (Ex): A flying polyp is surrounded by a constant wind which is impossible to conceal. It automatically fails all Move Silently checks, and can be heard with a DC 5 Listen check 100 feet away. Not even the silence spell seems capable of stopping the noise.

Pseudonatural Appearance (Ex): A flying polyps' appearance is so horrible and unnatural, all creatures receive a -1 morale penalty to attack rolls against it.

Touchsight (Ex): A flying polyp is blind but it possesses a strange sense which can even bypass walls and solid objects, so long as the target is in range. This functions like blindsight, but even a silence spell is unable to stop it.

Windblast (Su): As a standard action a flying polyp can release a blast of hot dry air which burns and desiccates the skin. It deals 1d6 per HD in a 120 foot line or a 60 foot cone on its choice and a Reflex save for half, DC 28. Half the damage is fire and the other half untyped desiccating damage. Watery creatures such as most oozes, some plants, and creatures with the [Water] subtype take 1d8 per HD. Most constructs, undead, and things devoid of moisture take 1d4 per HD. The save DC is Charisma based.