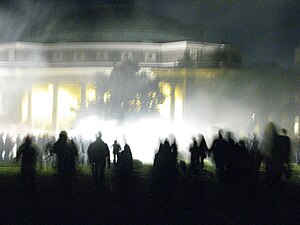 What stands before you was once a man, and is now little more than a shell of himself, moaning and groaning in response to near nonexistent instinct. A headcrab sits atop of the flayed remains like a despot on a grotesque throne, directing the corpse's limbs to follow its neural commands.

Headcrab Zombies are horrid manifestations of undeath brought about by a headcrab's control over the deceased's nerve system through microscopic receptacles within its mandibles and the tips of its legs. Doing this grants the headcrab at least marginal control over the motor functions, although usually quite minimal. The larger drones of headcrab zombies simply lumber around aimlessly, although the variation of these zombies is as great as the variations of the headcrabs themselves.

All headcrab zombies use the body that they have gained control over in order to wage combat more efficiently, using the body's strength and toughness to increase their chances of inflicting harm to their victims.

"Headcrab Zombie" is an acquired template of sorts that can be added to any corporeal humanoid given that he has been killed or coupled by a headcrab.

Size and Type: The creature's type changes to undead. It retains any subtypes except alignment subtypes that indicate kind. Alignment changes to neutral and it gains the augmented subtype. It uses all base creature's statistics except where noted here.

Hit Dice: Drop all Hit Dice from class levels (to a minimum of 1), quadruple the number of Hit Dice left, and raise them to d12s.

Base Attack Bonus: A headcrab zombie has a base attack bonus equal to ½ its Hit Dice.

Skills: Headcrab zombies have no skills, but they inherit the mental skills of the headcrab controlling them.

Feats: Headcrab zombies retain no feats from the base creature, but they inherit the Improved Initiative from the headcrab controlling them and gain Toughness.

Advancement: Up to twice its minimal HD. No size adjustment

These are the traits inherent only in the normal headcrab zombie. They are in addition to the general Headcrab Zombie traits.

Flayed and dripping with all manner of tissue and sinew, these stripped down human corpses are the epitome of post mortem insanity. Spurred on by the incessant hyperactivity of a fast headcrab, they pounce, climb, jump and run with a speed that makes them highly efficient hunters and killers. Although they barely possess instincts to call their own, the headcrabs in control give them a powerful edge in combat. They are often dispatched by the combine to quickly clear blocks full of rebelling repatriated citizens without harm to their troops.

These are the traits inherent only in the fast zombie. They are in addition to the general Headcrab Zombie traits.

Speed: Speed increased to 40 ft. due to being hastened (see Alacrity).

Armor Class:: +2 natural armor bonus and a +1 dodge bonus to Armor Class due to being hastened (see Alacrity).

The poison zombie walks bent over under the horrors of its own manifestation, the poison that courses through it due to being host to between two and five poison headcrabs having mutated it, its body thickened with cysts, calluses and unnatural growths giving it an extreme toughness. Compared to other zombie types, a poison zombie takes quite colossal punishment to take down.

These are the traits inherent only in the poison zombie. They are in addition to the general Headcrab Zombie traits.