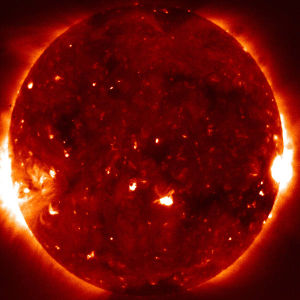 The sun is evil!

The temperature continues to rise as a burning red sun rises over the horizon. It is almost as if the sun itself were coming closer to the planet... to your horror, the sun begins to grow, and expand, as it rushes towards you... you can almost make out a cruel demonic face within it's painful light...

Evil fire elementals who have absorbed the power of hellfire into their being usually perish, but a few managed to harness the energy, bloating to tremendous size as their bodies become a hellfire engine generating their own unstoppable flame. They sail above the skies, appearing to be bright stars or the sun itself, then dive bomb the surface and burn everything to ash, leaving terror and destruction in its wake.

The Hellstar is little more than a ball of incandescent gas, superheated plasma with a heart of hellfire. A face sometimes plays along the surface, with dark "sunspots" and solar flares visible. When moving at high speeds it leaves trails of fire in its wake, appearing as a comet. In spite of its Chaotic tendencies, they are unusually common in Baator, where they hide amongst the ever-falling fireball storms of that plane. Some say Mephistopheles himself is the one who engineered these terrors. Given his control of hellfire, this may not be too far off.

Hellstars are reckless, fearing little as they zoom down on surprised opponents from above. They raise the temperature to an unbearable degree, scorching the landscape as much as their opponents. Only if the enemy puts up a prolonged fight or fails to char properly does a hellstar become serious. In such cases it will either become bored and retreat to torment another, or throw a tantrum of epic proportions, its rage directed at whatever happens to be in the way.

Absorb Fire (Ex): A magical attack that deals fire damage heals 1 point of damage for each 3 points of damage the attack would otherwise deal to the hellstar. If the amount of healing would cause the hellstar to exceed its full normal hit points, it gains any excess as temporary hit points to a maximum up to twice it's normal hit points. For example, an hellstar hit by a fireball gains back 6 hit points if the damage total is 18 points. An hellstar gets no saving throw against fire effects.

Burn (Ex): Those hit by a hellstar’s solar arc attack must succeed at a Reflex save (DC 42) or catch fire. The flame burns for 1d4 rounds and deals 2d6 damage a round, half fire and half divine damage. A burning creature can take a move-equivalent action to put out the flame. Creatures hitting a hellstar with natural weapons or unarmed attacks take fire damage as though hit by the hellstar’s attack, and also catch fire unless they succeed at a Reflex save. The DC is Constitution-based.

Cosmic Toughness (Ex): The hellstar's sheer mass grants it a great deal of durability. It receives an extra +100 hp per HD.

Scorch Earth (Su): The hellstar can focus it's cosmic energy down in a single focused blast upon the earth, obliterating anything beneath it for miles and miles. As a full round action it begins a 1 minute countdown, visibly drawing in energy at a single point on its body. During the next minute, it becomes immobile and unable to move unless it cancels the buildup of energy. It is capable of acting normally otherwise. At the end of its 10th round, the collected energy surges down at its targets, dealing 60d6 hellfire damage in a 20 ft radius burst. As hellfire, fire resistance is ignored, and fire immunity only halves the damage. The area remains dangerous for 1 round, after which it expands in a billowing cloud of flame outwards akin to the spell cloudkill, dealing the half the amount of the initial strike to all it blows over. The cloud moves out at a speed of 50 ft a round, and is 10 ft thick. The ring will continue to expand, dissipating after 1 minute, or 5000 ft has been destroyed. Land effected by this attack is unable to grow plants and animals avoid it, tainted by pure evil. Such corruptions can remain on the land for years to come. The hellstar will often deploy this to destroy cities all in one fell blow. A Reflex save halves the damage of both the initial blast or the resulting expanding cloud, DC 42. The saving throw is Constitution based.

Epic-nailed to the sky, rain of fire

Heat Wave (Ex): The mere presence of a hellstar destroys the environment with scorching heat. Everything within 500 ft. of the hellstar takes 2d6 fire damage every round from the waves of blazing fire. Places where the hellstar has passed near earth are little more than ash and cinders.

Radiation (Ex): Deadly radioactivity emanates from from a hellstar. Everyone within 60 ft. of a hellstar must make a Fortitude save DC 42 or take 1d8 Constitution damage, save for half. Spells which block light (rather than just dim it) also block the effects of radiation. The DC is Constitution-based.