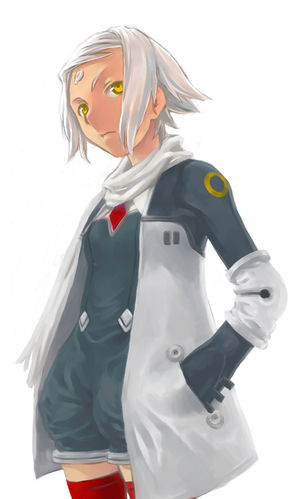 A magne appears human, but inside they are bound with steel.

Humans with high-metal concentrations in their body, they are magnetically inclined.

Magnes are a particular breed of human and are nearly indistinguishable from them, save for a few small visual clues. Their personalities match that of the human population and as such, the only consistant feature among them is how variable they can be from one another. They do lean slightly towards lawful behaviors through nurture, not nature, as the magnes have become friendly with dwarven communities. Dwarves find the "earthtouched" magnes to be closer to dwarves, and magnes appreciate the craft of the dwarves, often becoming catalysts for technological progress in the otherwise slow moving or stagnant dwarven societies.

Magnes appear much like humans, though they tend towards shorter heights than your average man, and have darker or grayer skin tones. However, their bodies are infused with metal right into the bone. The metallic content inside your average magne would kill a human from heavy metal poisoning, but for the magne it is a normal trait which gives them superior durability, and a strange connection to the field of magnetics in the world. Small bits of metal sometimes breach the skin, commonly within the center of the forehead, giving the appearance that it is some metallic headpiece or jewelry. It is through these external bits that they gain the majority of their magnetic sensory abilities.

Because of the metal, magnes are much heavier than your average human, surprising for any poor human who needs to lift one and underestimates the load.

Magnes are allies and enemies to many, as are their human kin. They do tend to get along better with dwarven cultures over elven cultures, and enjoy the technological gadgets of gnomes. The hum of machines often comes with the creation of various electrical and magnetic vibrations not found in nature, even though the creators are often unaware of the suble layer of experience they are providing their magne observers.

Magnes can become any alignment, and tend mildly towards lawful alignments.

Magnes originally hailed from a human populated land called Magnesia, a land rich in lodestone. It is uncertain if the land itself affected the humans living there, or some manner of magical or technological advance or mishap had born them, but it was from this ancient nation the magnes spread, until the sands of time and history's inevitable march swallowed up the kingdom like so many others. Now, magnes can be found in any land populated by humans.

Magnes do not have a creation deity of their own, and as a race they are fairly young (at least compared to the extent of history). Magnes, rather, identify themselves as humans, just as wood and high elves are both elves at their core. Thus, magnes follow the gods of humanity and of the local region.

Magnes speak Common, but it has been said that conversation between two magne are spiked with invisible magnetic pulses which the magne themselves understand. For them it is more of an accent than another language, the magnetic undertones adding emphasis and flavor to phrases which otherwise have none.

As a human subrace, magne are named identically as their human kin.