Merlings are reclusive creatures, spending their days in their underwater kingdom. Except at areas of trade on shore you rarely see merlings, especially inland, where they may be deprived of their water. Beneath the sea they are bustling as humans, but the race as a whole are soft spoken, stubborn, and mildly xenophobic. They are mired in tradition and rarely break rank, for better or worse. 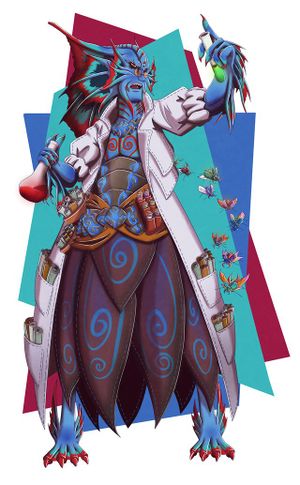 Merlings are of lithe, waif-like human shape, with smooth glossy skin of multicolored hue. They come in a range of colors, from pale yellow to deep blue, and sometimes possess multicolored stripes, chevrons, or other designs on them. They have red eyes, every one of them, with a double eyelid, clear, for swimming. They have ribbed fins for ears and fins coming off of their arms, legs, large back wing/fins, and small fins on their chest or shoulder.

They have their gills on their neck, but can breathe air as well. They survive on a mixed diet of seaweed and fish. They're usually found by the edges of underwater continental shelves.

Merlings do interact with surface dwellers for trade and business, but seem rather standoffish for anything else. Surface concerns belong on the surface, and so long as no dire threat pierces beneath the wave, what do they care?

They may have any alignment, but they tend towards lawful.

Merlings live in underwater kingdoms and are rarely found on the surface. When they are, it is in climates of moisture to keep wet.

Traditional theology has Merlings worshiping Otohime the Sea Dragon, a goddess who protects the oceans. More modern days shows increased worship of local gods picked up from docks and travel.

Names are often done to the theme of jewelry, stones, and beautiful sea structures. "Ruby", "Pearl", and "Coral" are all common names.