A Mogeko who has honed its abilities to be a master at capturing prey. 10 5 Good Poor Good Good Prepared Divine Spellcasting, Spontaneous Arcane Spellcasting, Other Other 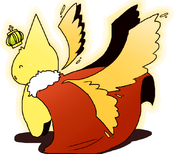 You won't escape... Why do you bother to run when you know it's futile?

Mogekos, in general, love to play with members of other humanoid races. And by "play with", we mean "kidnap them and proceed to do unspeakable things to them". Mogeko Snatchers are really, really, really good at doing this — indeed, they have honed their natural talents in order to achieve this heinous goal.

Mogeko Snatchers are specialists in hunting enemies and restricting the enemy's options. They are very capable in straight-up combat, but truly shine when their movement-denying abilities are brought to bear — especially grappling, which they are exceptionally good at.

Races: As the name implies, only a Mogeko can become a Mogeko Snatcher.

Skills: To become a Mogeko Snatcher, one must have at least 8 ranks in any three of: Gather Information, Listen, Scent, Search, Spot, and Survival.

Alignment: A Mogeko Snatcher must have an evil alignment; no doubt this is due to the whole "kidnapping and endlessly tormenting sentient beings for fun" thing.

All of the following are class features of the Mogeko Snatcher.

Weapon and Armor Proficiency: Mogeko Snatchers gain proficiency in saps, nets, whips, and daggers (including spiral daggers), if they do not already have those proficiencies.

Abduction is worth repeating here because the Mogeko Snatcher is much, much better at it than an ordinary Mogeko. Each level in this racial paragon class enables the Mogeko Snatcher to use it more frequently (see the table above), and improves upon it further at higher levels.

Track: A Mogeko Snatcher gets Track as a bonus feat at 1st level, even if it doesn't meet the prerequisites. If it already has the feat by virtue of being a ranger (or begins taking levels in ranger later), it gets a +2 racial bonus to Survival checks and increases its racial bonus to Search checks to +4 instead.

Hardy Grappler (Ex): Good grappling technique is essential to capturing prey — and can also be quite helpful in subduing it. A Mogeko Snatcher counts as one size category larger than it actually is for the purpose of grapple checks.

Where there is Mogeko, there is nightmare: A 2nd-level Mogeko Snatcher gets a +2 racial bonus to Intimidate checks, overwriting the −2 racial penalty taken by other Mogekos.

Super Scent (Ex): A 3rd-level Mogeko Snatcher's scent ability is improved; it can now detect a target from up to 120 feet away (240 feet upwind, 60 feet downwind) and pinpoint a target within 40 feet. Its racial bonus to Scent checks improves to +16.

Scrying (Sp): A 5th-level Mogeko Snatcher can use scrying, as a 4th-level spell, as a spell-like ability twice per day. The Mogeko Snatcher can scry on any plane of its choice, and it can choose to scry on a general creature category (race, age category, and gender) instead of a specific creature; if not trying to scry on a specific creature, it attempts to scry on a random creature which meets the parameters it establishes when using the spell-like ability (even if that creature has no connection to the Mogeko Snatcher, though it gets a +10 bonus to its Will save in that case), and if successful, it gains secondhand knowledge of the scrying subject and can specifically choose to scry on that creature when using this ability again. A Mogeko Snatcher gains a +2 racial bonus to the save DC of its scrying ability. The save DC is Charisma-based.

At 7th level, the Mogeko Snatcher can use scrying three times per day, and can be aided by other Mogekos (see Communal Scrying below).

At 10th level, the Mogeko Snatcher can use scrying four times per day, and the racial bonus to the save DC increases to +4.

A sacrificed spell that is enhanced by metamagic (other than Heighten Spell) or simply prepared in a higher-level spell slot contributes its actual spell level to the scrying attempt, not the level of the spell slot. A spontaneous caster who has spell slots of a higher level than they are actually able to cast (due to an insufficient ability score or other reasons) can only contribute a number of spell levels equal to or less than the highest-level spell they can actually cast, even if they contribute a higher-level slot.

Probe Thoughts (Sp): An 8th-level Mogeko Snatcher can use probe thoughts, as the spell, once per day per point of positive Charisma modifier (minimum 1). The save DC is Charisma-based.

In contrast to Mogeko Sages, who can also use probe thoughts but tend to do so in order to gauge a person's trustworthiness and the best way to help (or thwart) them, Mogeko Snatchers use probe thoughts to pick apart the details of their prey's life and break their will to resist.

Combat: The Mogeko Snatcher is a hunter, trapper, and disabler, stalking its prey and trying to force a close-quarters confrontation where it can grapple its target until they can no longer resist.

Advancement: Mogeko Snatchers prefer taking levels in classes that aid them in hunting down their prey and capturing it.

Mogeko Snatchers are sort of like bounty hunters, except that they hunt for the sake of their own pleasure. They are feared predators, and rightfully so, for once you've attracted the interest of a Mogeko Snatcher, it's extremely difficult to get rid of them, and if they catch you... you don't want to know what will happen to you. Just trust me on this one.

Daily Life: Mogeko Snatchers spend most of their time practicing their hunting skills. Higher-level ones supplement this by scrying upon potential victims on other planes.

Notables: King mogeko is the leader of Mogeko Castle, and the main reason why the Mogeko race is so twisted and decadent. He is obsessed with sex, violence, prosciutto, and high school girls, and the other Mogekos largely follow his example. Moge-ko is a ferocious, sadistic, borderline insane warrior whose favorite pasttimes include taking naps and slowly torturing people to death; even King mogeko is terrified of her, and would really appreciate it if she were to be killed.

Organizations: Mogeko Snatchers are the de facto leaders of the Mogeko race. They command legions of lesser Mogekos to do their bidding; in exchange, they use their abilities to acquire lots of "toys" for their minions to "play" with.

NPC Reactions: Mogekos love Mogeko Snatchers. NPCs of other races fear and despise them, and would love to see them gone forever and ever and ever.

Characters with ranks in Knowledge (the planes) can research Mogeko Snatchers to learn more about them. When a character makes a skill check, read or paraphrase the following, including information from lower DCs.

Mogeko Snatchers in the Game[edit]

Adaptation: ...Do you really want to know?

Sample Encounter: As previously mentioned, Mogeko Snatchers are best-suited for the role of boss character. They can range from overwhelmingly powerful foes for the PCs to avoid at all costs (harder than it sounds, considering the Mogeko Snatcher's aptitude at hunting and tracking) or roadblocks for the PCs to get past. The pinnacle of Mogeko Snatchers are Moge-ko and King mogeko themselves — the exemplars of the rotten condition of the Mogeko race. There is no more fitting end for a Mogeko-centric campaign than an epic showdown with either one of the two, if not both (at the same time or in succession).