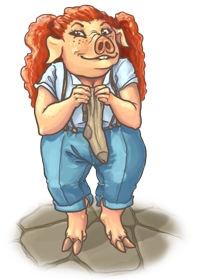 Pygga are small, urban fey appearing in the form of small, anthropomorphic pigs. They are born out of wild desire and greed and can find really gross mushrooms pretty much everywhere.

Pygga have varied personalities, although they are pretty much all greedy, perverted and obsess over seemingly random things. They tend to be curious but mostly attempt to avoid danger and the attention of more powerful creatures. They also highly enjoy openly taunting creatures, although given their short stature, frail body and cowardly attitude, they tend to flee as fast as possible afterwards.

Pygga have a very short stature, measuring about the same height as a halfling except they are much heavier and fatter. Pygga look like cartoony, small pigs with a humanoid posture. They have hooves for feet much like pigs and hands with fingers and opposable thumbs. Their pig features tend to be exaggerated and their few humanoid features are faint or downplayed.

Pyggas are annoying thieves and perverts, but they are fey, and people generally know better than to go out of their way to mess with fey. Pyggas are (rightfully) mistrusted and rejected by the bulk of societies. Nymphs tend to harbor a particular dislike of pyggas.

Pyggas can be of any alignment but tend toward being chaotic.

Pyggas exist both as urban and wild fey, thus reside in both cities or in nature. They do not have land of their own and many share the same communities as other fey.

Pyggas can be of any religion, but like most fey, they tend to disregard religion and worship gods of nature. Gods of greed, lust or pigs are also popular among pyggas.

Pygga's main language is Sylvan. They often communicate with fey and humanoid so the overwhelming majority know Common as well.

Pygga don't actually name their children. Each pygga chooses its own name when it comes into adulthood. Names can range from "Honk Pyg" to "Sir Sockbane" to mundane names like "Bill".