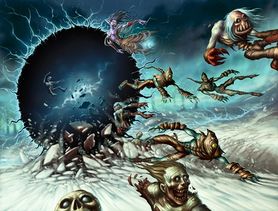 This fearsome spell turned monster has acquired a taste for wanton consumption.

This living version of a singularity spell is driven by a singular need to consume.

Living singularities are smaller versions of the real thing, but by no means less dangerous. They are roughly 20 feet in diameter and have negligible weight.

This creature is created with the Living Spell template from MM3.

A living singularity's natural weapons and any weapon it wields are treated as magic for the purpose of overcoming damage reduction.

Spell Effect (Su): A creature hit by a living singularity's slam attack is subjected to the normal effects of the singularity spell (caster level 17th), as if it were within the singularity's area. Saves apply as normal for the spell; the DC is 23.