*As wearer (if better) when worn via Item Form. 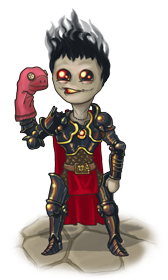 Rumor has it that the real reason socks seem to vanish in the laundry is that they are spirited away to the legendary Plane of Socks, a landscape covered in countless foot covers of all shapes and sizes in great mountains, and home of the mysterious Socked Powers which be. With their divine foot, they give life to the single pair of socks and transform it into a Sockling, one of their own, returning it to the material plane for their mysterious purposes that not even the Socklings can comprehend.

A sockling is a sock, or more specifically a sock puppet, animated with its own life force. They come in many shapes and sizes, most tiny sized ones for medium sized creatures. Buttons or bobbly toy eyes are used for sight, and its mouth is merely a fold in the sock where an invisible hand seems to puppet it and cause it to crawl along the ground. They are intelligent (though generally dim witted compared to humans) and have a surprising social skill. Which is good, because they have very little else going for them. Because they are so weak, many end up paired as familiars for sake of survival and having entertainment. They are a favorite of bards and other charismatic types beyond all else.

A sockling is usually no more than 1 foot long, and come in many colors and patterns. They weigh almost nothing, being a tube of hollow fabric. They can speak Common.

Socklings can't do much for combat, and usually try to talk their way out of a situation, or sneak away in order to use Lost Sock. They have a bite attack if need be, but it only deals non-lethal damage. If used as an item via item form, they help augment their allies by allowing unarmed strikes, improving unarmed strikes, or channeling touch spells.

Lost Sock (Sp): If left unobserved for at least 1 minute, a sockling can lose themselves and effectively teleport (self only) to a random location. The location cannot be chosen with accuracy, but it is always somewhere unobserved and relatively safe (if possible). If used as a familiar, the sockling can always choose to teleport to their master's location (still unobserved) instead of moving to a random location.

Inanimation (Ex): A sockling gets a +15 bonus to Disguise checks to appear as a normal sock. This rises to +30 in a pile of laundry.

Item Form: Being a sock puppet, a sockling can be "worn" like a magic item which consumes one of the hand slots (allowing another one-handed hand slot item such as the glove of storing). As a worn item it gains several benefits. The wearer may use unarmed strikes without provoking attacks of opportunity, and deal +1 additional nonlethal damage. If the wearer is proficient, they gain +2 nonlethal damage.

The sockling has a telepathic connection with its wearer and speak or translate for them even if the wearer is gagged or unable to speak themselves. They are treated as an attended magic item, and thus do not have a movement speed and use their wearer's saving throws. They can be attacked via sunder attempts. The wearer must keep the hand free to benefit from the sockling. When using items in the sockling "hand", or its mouth, they have a -1 penalty to attack and skill checks for not being completely under their control.

A sockling must be willing to engage item form, otherwise a sockling just slips off the creature's hand.

Those who have sockling familiars have additional benefits, allowing the sockling to make the somatic and verbal components for them. However the master must still expend the action to cast. The master may cast touch spells without provoking attacks of opportunity, which are channeled through the sockling to their target.

Socklings can be bound as familiars, in which case it has the alignment of its owner. Socklings make lively and chatty familiars, being able to speak, and often end up in friendly antagonistic relationships with the master typically as the straight man in the routine. It doesn't provide any familiar benefits, but its item form abilities and the ability to speak are often more than enough.