From Dungeons and Dragons Wiki
< User:Luigifan18
Jump to: navigation, search 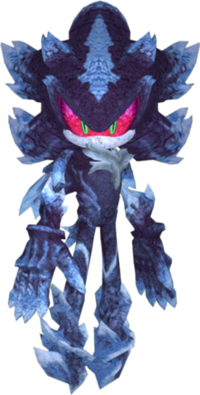 Why fight for those who will betray you?

Mephiles the Dark is a mysterious, charismatic, and highly intelligent entity who seems to crave nothing more than destruction.

Knowledge (history) DC 10: One half of the sun god Solaris, Mephiles the Dark is the sun god's conscious mind. He was driven insane when separated from Iblis, his other half, in an experiment designed to enable the government to harness Solaris's power to manipulate time.

Knowledge (history) DC 20: Mephiles's true form is a nebulous blob of shadow. He obtained his current form by stealing the shadow of the Ultimate Life Form, Shadow the Hedgehog.

Knowledge (history) DC 30: Mephiles cannot truly be killed, only sealed away in an artifact known as the "Scepter of Darkness". Sadly, this has become far less effective since he took Shadow's form.

Knowledge (history) DC 40: By causing Princess Elise to cry, Mephiles was able to release Iblis from his imprisonment within Elise's body. He then merged with Iblis using the Chaos Emeralds to resume his original form, after which he began to devour time itself. Luckily, he was defeated and destroyed by Sonic, Shadow, and Silver before he could unmake the universe.

Knowledge (history) DC 50: Mephiles should have been erased from time roughly six years ago, after Solaris's defeat at the hands of Sonic, Shadow, and Silver. But his erasure was undone by Mysto the Time Mage... The two now work together to destroy the Belnades clan and achieve Mysto's dreams of a better world for the Slavic people.

Knowledge (religion) DC 50: Mephiles appears to be descended from the Slavic thunder god, Perun. Could he actually desire to unmake the world and undo the dominance — no, the very existence of the Catholic Church?

Mephiles the Dark is a close ally of the archmage Mysto — in fact, the two regard each other not only as equals, but as lovers. How such a union came to be is a question that very few desire to know the answer to.

Mephiles himself is an extremely powerful warlock, but also something of a coward (which is rather ironic considering his inability to die). Thus, he often leaves his dirty work to his minions, the Mephiles Beasts. Mephiles is also extremely intelligent, and his charisma is quite potent as well. Thus, he is an extremely competent planner, and he can corrupt the minds of mortals with nothing more than honeyed words. Luckily for the forces of light, Mephiles's cowardice causes him to second-guess his plans a lot (not that he'd ever admit it), and he therefore has a tendency to outthink himself; as a result, his schemes are frequently way too complicated for their own good.

Paradoxically, Mephiles is well aware that he can't truly die, and has a penchant for taking advantage of this. He'll allow enemies to vent their anger on him if it means they'll give in to the dark side.

As a warlock, Mephiles is capable of attacking with shadowy eldritch blasts, but his primary offense stems from an endless army of clones. He usually hides within the shadow of his enemy and allows his clones to dogpile the foe into submission, then explode for massive damage. There are very few ways to expose Mephiles and force him to fight head-on. The most effective way to expose Mephiles is to use the power known as Chaos Control, but this is a talent that few possess.

In his natural form, Mephiles is a formless blob of darkness. His main diplomacy form is a duplicate of Shadow the Hedgehog with gray stripes and green eyes. When words fail, Mephiles assumes a crystalline battle form.

Mephiles's power over time is second only to Mysto herself, but his command of the darkness is unequaled. Mephiles searches for Iblis so that he may once again regain his true form and unmake the world. His signs are thus related to darkness, fire, and the flow of time. As Mephiles gets closer to his goal of locating and merging with Iblis, his sign advances.

The Knowledge skill to identify Mephiles's signs is Knowledge (religion).

Faint: Shadows become more common, and the sky seems to be a little less bright.

Moderate: Creatures of fire appear alongside the shadows. The flow of time is mildly erratic.

Strong: Fires blaze hotter, days are brighter, and nights are darker. The flow of time is erratic. The effects here are similar to those of the Dead Sun sign.

Overwhelming: Dark fire threatens to consume time itself. Eye-like spheres of Huge size appear out of nowhere. These spheres are actually rips and tears in spacetime. The purple-colored voids suck everything in a 60-foot radius towards themselves, and anything that touches them is sucked in and utterly lost. The orange-colored voids instead conjure up large, heavy objects from out of nowhere and launch them at passerby. Solaris, the eagle-like sun god, can be seen in the sky — if Mephiles's influence is this strong, he's already merged with Iblis, and it's only a matter of time before the timestream is consumed and the multiverse is erased. As the multiverse drifts closer to destruction, more and more voids appear. If they reach a great enough population density, time is doomed, and Mephiles will remake the multiverse so that his father reigns supreme... If the PCs confront Mephiles at this point, they face not Mephiles, but Solaris.

Anathematic Secrecy: Mephiles is immune to all divine divination spells and effects. Mephiles is a god himself (or half of one, anyways), and as such is highly competent at shielding himself from the prying eyes of his peers.

Inside the Fire: Mephiles practically embodies existential despair. Once every 10 minutes, he may manifest cadence of the last breath as an 80th-level manifester, as if he had spent 80 power points on it. Divine spellcasters take a −4 penalty on their saves and power resistance against it, assuming that he allows them to attempt a save at all.