From Dungeons and Dragons Wiki
(Redirected from List of Spelljammer crystal spheres)
Jump to: navigation, search

This article provides a list of Spelljammer crystal spheres, or planetary systems, created for the Spelljammer (1989) campaign setting. Notably, Spelljammer ties in with three other campaign settings—Dragonlance, Forgotten Realms, and Greyhawk—by placing these settings on celestial bodies in these systems.

Each system is listed from innermost body to outermost. Unless otherwise noted, all planets are spherical, with breathable air.

Collectively Greyspace, Krynnspace, and Realmspace are known as the "Radiant Triangle." 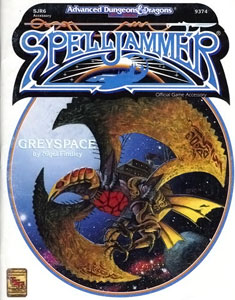