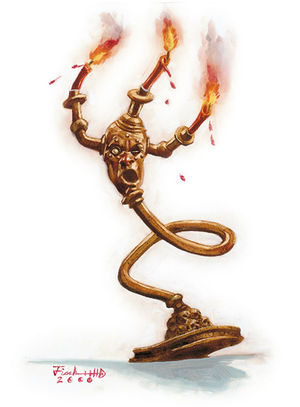 A candelabra brought to life as an animated object. Image by Scott Fischer

An animated object is a type of construct given a semblance of life using relatively simple arcane rituals. The appearance and function of an animated object can vary greatly, because they can be made from nearly any otherwise mundane object. Unlike many constructs that are designed to serve as guardians and companions, animated objects are created simply for the convenience of their creator — a commonly-used object that can follow an individual around, perform tasks on its own, or double as an impromptu combatant are in high demand among the magically-inclined.

The animated objects described here are those of Tiny size — objects small enough that a human could easily carry them in their hands. These animated objects are extremely fragile but also easy to create, so they are by far the most common.

An animated candelabra makes attacks against as many foes as possible before it is destroyed, attempting to set them all on fire. Even after it is destroyed, dying ember gives it a chance to deal some damage to foes who aren't careful.

Animated daggers prefer to harry their opponents by shifting around the battlefield, never remaining in one place for very long but always attempting to remain adjacent to more durable allies.

Animated pots are often commanded to swarm around more fragile animated objects, seeking to shield them from harm. They rely on iron resilience to protect them from the first attack that manages to hit, but they don't alter their tactics after it has been used.

An animated rope attempts to wrap itself around the most obviously threatening foe and then strangle that target to death using constrict.

A character knows the following information with a successful Arcana check.

DC 15: Animated objects are minor constructs created by various spellcasters from mundane items to serve as guardians, servants, and sometimes pets. They are among the weakest constructs that a mage can produce, and are thus very commonly used in combat by apprentice wizards and fledgling sorcerers. More powerful mages rarely use them in battle -- that role is better filled by golems and other specialized constructs -- but will often keep them around for the convenience of having an object that can move around of its own accord.

DC 20: The type of item an animated object is created from greatly affects its specific abilities. Animated candelabras burn with an eternal magical fire, which they can use to ignite their enemies. Animated daggers can hover a short distance off the ground, allowing them to attack from unexpected angles. Animated pots are more resilient than their size would suggest, and might use their lid to conceal other creatures inside their body. Animated ropes can climb up objects in a manner similar to snakes, and can wrap around their enemies.

Tiny animated objects are almost always found in small groups and/or alongside their owners; when they aren't, they're typically encountered in the home or workplace of a spellcasting individual.