This incredible engine of destruction is a creation of clockworks and thousands of tons of highly armored steel. The legend of this machine is intertwined with many counts of unexplained destruction. Entire fortresses would disappear off the map overnight and be replaced with scorched rubble, leaving behind not a single survivor to document its passing. As such, the wave of destruction was given the basic name 'Annihilation', and the name carried over to the massive construct that stood at the battlefront.

An annihilator stands 150 feet tall from the ground to its top, consisting of a 100 feet large, shell like head that contains four ballista apertures and two siege weapon placements, with four massive legs, each over a hundred feet in length. The entire construct weighs about 20,000 metric tons, which is mostly steel. It derives power for its automotive and battle prowess from permanent apertures to the elemental planes harnessed in a magical reactor within its body. 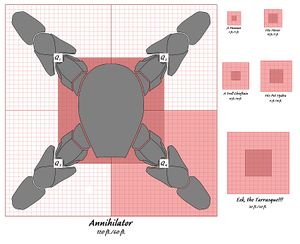 A comprehensive size comparison chart. The Q-numbers on each leg correspond with the quadrant of each leg. See Annihilator Leg for more information.

An annihilator has a central body that carries two deflectors and stands on four legs. Each leg has a space of 60 by 60 feet, creating a combined creature space consisting of four of such squares, defaulting to a 120 feet space, and a reach of 60 feet beyond that. An annihilator uses the Initiative score of its legs for its entire body. An annihilator's shape allows it to either clear or crush cliffs, ledges, and buildings of approximately 60 feet high or lower that stand in its way. An annihilator is also actually a vehicle. It is piloted from within its main body by a pilot and a crew to operate the many different controls on board. The annihilator's main body functions as golem armor in that it safeguards its crew against enchantments, illusions, and mind-affecting effects from external sources. An annihilator has a carrying capacity of 3,250,000 pounds.

Magic Immunity: An annihilator - that is to say, all parts of it - is immune to all magical and supernatural effects that allow spell resistance.

An annihilator's main body is heaved high above the ground on its four legs. Its shape somewhat resembles the shell of some sort of crustacean, but it is clearly made of highly reinforced metal. Somewhat far back, the body has two siege weapon placements that are used to assault large groups of enemy soldiers or to reach buildings on elevated terrain.

An annihilator's main body lies far beyond the reach of most characters, and must be either brought down by destroying two of the construct's legs or by pelting it with ranged or siege weapons. An annihilator's main body has a small, strongly shielded upper deck that allows for several creatures to stand on top of it to either make ranged attacks, man the siege placements, or cast spells. Everybody standing on its deck has a 50 % percentile chance to be unaffected as if immune by any enchantment, illusion, or mind-affecting effect. If the percentile check - which can be considered a concealment check against spells and effects of these schools and with these descriptors - fails, then the creatures on deck are still entitled to a Will save. Creatures standing on deck of the Annihilator also gain a +30 deflection bonus to Armor Class against ranged attacks originating from outside the Annihilator's shielding.

Armor Plating (Ex): The main body of an annihilator is covered by a heavy layer of armoring. This grants it an effective +20 to its damage reduction/epic and adamantine (raising it to 30) and 20 bonus hit points per Hit Die.

Out of Reach: The body of an annihilator is suspended by its legs at 60 feet above the ground. Only creatures of Gargantuan size or larger may make direct melee attacks against an annihilator's main body (or Huge creatures with a melee weapon that has reach) without having to jump. Any other creature needs to be able to jump well enough to reach a height of 60 feet or cannot directly attack the annihilator's main body.

Plasma (Su): Some of the annihilator's most powerful attacks do plasma damage. This plasma is a highly energetic substance that is formed from extremely concentrated combined essences innate to the Elemental Plane of Fire and the Elemental Plane of Earth. Its power is too primal to be reduced by resistance or even immunity to both acid and fire.

Purify (Ex): An annihilator can release an enormous burst of biting fire from two large muzzles mounted to the front of its body. This functions as a breath weapon spreading out in a 200 ft. cone, dealing 60d12 plasma damage, which is irreducible by any resistance to fire. Creatures caught in the area of effect are entitled to a DC 52 Reflex save to halve the damage dealt. The DC is Constitution based. After the purify ability is used, the annihilator must wait 1d4 rounds before using it again.

Siege Placement: The annihilator has two siege placements, that each contain a Gargantuan catapult that is loaded with burning ammunition. These catapults each have 30 HD, an attack bonus of +15, 225 hit points, an AC of 20 (plus the annihilator body's deflection bonus), and a range increment of 100 ft. If the catapults are to be used, they must declare an attack against a square of Gargantuan size (AC 1). When the annihilator is moving, its catapults take a -10 circumstance penalty to attack rolls due to movement, limiting their effective range. A catapult's payload does 10d6 bludgeoning damage plus 10d6 fire damage to everything within 30 feet from the blast epicentre (Reflex DC 25 half). Each catapult requires a reloading time of 2d4 rounds after firing. The siege placements can also hold other objects or creatures up to one object or creature of Gargantuan size or any comparable amount of smaller creatures.

These monstrous limbs are also completely fashioned of heavily reinforced steel, thick, robust clockwork guiding their surprisingly sophisticated movement. A completely intact annihilator has four legs. The legs have several heavily shielded joints that allow it to move its legs in order to move in any direction or anywhere that its legs can reach.

Armor Plating (Ex): An annihilator's leg is covered by a heavy layer of armoring. This grants it an effective +20 to its damage reduction/epic and adamantine (raising it to 30) and 20 bonus hit points per Hit Die.

Deathstomp: With a successful slam attack made by one of the annihilator's legs, it may attempt to immediately crush the target for triple damage. A successful DC 58 Reflex save negates this effect. The save is Dexterity based.

Trample: An annihilator can be forced to try and trample over a creature or horde of creatures. The result is a movement in a straight line where it tries to move into the square of its targets. The trample attempt deals 24d8+90 bludgeoning damage to anyone successfully trod underfoot. The Reflex save DC against this ability is 77 for Colossal creatures, but every cumulative size category smaller gets an additional +10 circumstance bonus to its Reflex save (+10 for Gargantuan creatures, +20 for Huge creatures, etc.) The save DC is Strength based.

These yellowy light-emitting nodes are situated within relatively small indentures within the main body's hull shape. They are visible with the naked eye, and can be individually damaged. One of the deflectors is on the left, and the other on the right of the annihilator's main body.

The deflectors lack the rest of the annihilator's superior armoring and are quite vulnerable to prolonged attacks. They get a +20 circumstance bonus to Armor Class due to their placement on the main body's hull.