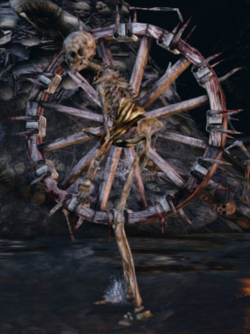 Bonewheels are a terrible combination of a large cart wheel festooned with sharp, oft gangrenous steel blades jutting from the rims, and a particularly savvy skeleton in the middle. These vile creatures lie in wait in their aged catacombs and dens of evil, and use weight and rotation to slice anything living to bits with a passion.

Bonewheels are completely entangled within their spiked wheels, and their own method of attack is spinning their entire bodies and rolling at the enemy in a mad dash, tearing them to shreds. Spinning their wheels makes an obvious sound, of metal striking the floor over and over again, alerting anyone without needing to make a Listen check unless they are deaf.

When bonewheels are not rolling around, they can only stagger about at a very slow speed due to the wheel they are stuck in constricting their movements.

Spiked Wheel: A bonewheel's wheel is treated as a manufactured weapon that deals 1d6 base damage with a critical modifier of 18-20/×2. The spiked wheel's damage type is piercing or slashing, whichever is more advantageous in any situation. If an attack with a bonewheel's wheel would miss the target as a regular attack, but hit the target as a touch attack, the target's AC counts as 2 less for the purpose of any subsequent attacks made by the bonewheel that turn. This effect is cumulative for every missed attack that hits the target's touch AC, and cannot lower the target's AC below its touch AC.

Spiked Wheel Barrage (Ex): As a full-round action, a bonewheel can spin itself with great force, sending its body and wheel hurtling forward at the enemy. A bonewheel's barrage grants it up to 60 feet of movement in a straight line. During a spiked wheel barrage, the bonewheel can attack four times at its full attack bonus. The bonewheel automatically attacks the closest creature in line and continues its movement once it misses the creature's touch AC, attacking the next creature in linem, and so forth. The bonewheel stops its movement once it expends all of its attacks or upon moving the full 60 feet.

*:During a spiked wheel barrage, a bonewheel advanced beyond 4 HD may move 10 feet extra and perform one additional attack for every 2 extra HD it possesses .

Due to its Spring Attack feat, a bonewheel does not provoke attacks of opportunity for moving in combat while using its spiked wheel barrage.