Birthright is a Dungeons & Dragons campaign setting based on the world of Aebrynis on the continent of Cerilia, in which the players take on the role of the divinely-empowered rulers, with emphasis on the political, rulership level of gameplay. In 1996, Birthright won the Origins Award for Best Roleplaying Supplement of 1995. Though it has a dedicated fan base, Birthright currently has no corporate support, unlike Forgotten Realms and Eberron.

The setting revolves around the concept of bloodlines: divine power gained by heroes and passed to their descendants. Characters with a bloodline create an aura of command known as Regency, which is measured in the game using regency points or RP. Using regency, characters acquire a domain composed of provinces and holdings. The development of these domains is as much a part of the game as development of the characters. The game uses three-month domain turns to model actions of rulers over nations in much the same way as Dungeons and Dragons (and hence, Birthright) uses combat rounds simulating six-seconds of time to model the characters' actions in battle.

The world of Aebrynis has at least four known continents, the frozen continent of Thaele, the continent of Djapar to the southeast, the great southern continent of Aduria, and Cerilia, the location of the actual Birthright campaign. Cerilia itself is divided into five regions: Anuire, Rjurik, Brechtür, Khinasi, and Vosgaard, each named after the primary human group that first settled there.

Anuire is in the southwest portion of Cerilia. To its south are the Straits of Aerele, which separate Cerilia from Aduria. To the west lies the Sea of Storms (Miere Rhuann) and to the east the Gulf of Coeranys. The river Maesil forms a great highway through the heartlands of Anuire. Generally a temperate climate similar to Western Europe.

Rjurik is in the northwest of Cerilia. Large expanses of sparsely settled pine forests dominate this region. The climate is similar to Scandinavia, with the north much colder.

Brechtür is in the central north of Cerilia. The Great Bay almost separates Cerilia in half. The nations of Brechtür lie on the shores of the Great Bay. These realms are very mountainous and travel by ship is almost always preferred to overland routes. The Baltic may have similar climate.

Khinasi is in the southeast of Cerilia, has arid plains, rugged mountains, many islands, and desert.

Vosgaard is located in the northeast of Cerilia and is also known as the Heartless Wastes. The land is frigid and unforgiving. Conceptually similar to Siberia.

Cerilia was originally inhabited by the elves, dwarves, and goblins. Fleeing the corruption of Aduria by the dark god Azrai, human tribes settled Cerilia. At first contact between the elves and humans was peaceful, but conflict soon arose as the human population expanded into elven lands.

After years of manipulation and machination Azrai's armies marched on Cerilia. On his side were his Adurian minions, the Vos (a human tribe he had corrupted), and the elves, bitter from their wars with humanity. The human tribes and their patron gods met him in battle at Mount Deismaar, located on the landbridge between Aduria and Cerilia. The elves realized they had been tricked by Azrai and most switched sides. As their armies fought on the slopes of the mountain, the gods themselves met in battle. The other gods were only able to defeat Azrai by sacrificing themselves. In a colossal explosion, they destroyed themselves and Azrai. Mount Deismaar and the land bridge were destroyed.

The power of the gods was not wasted, however. It shot out and entered those present at the battle. The champions of the gods, those closest in ideal and virtue to their patron as well as physical proximity at the time of the cataclysm, received the most power. They became gods themselves, a new pantheon that would replace the old.

Other combatants also received some of the divine power of the gods. On the battlefield it did not take them long to realize that this power was in their blood, and could be stolen. A scion, as one of the divine blood is called, could have his blood strength stolen if killed by a blow piercing his heart.

The divine gifts of the scions make them able leaders. They form a connection to their people and land, drawing strength from them. And in times of need returning that strength and perform great deeds. They also can have a variety of other divine powers, such as long life, the ability to detect poison or project a divine aura, depending upon their bloodline strength and the god it was derived from.

Those who find themselves with the blood of Azrai often become powerful abominations, or awnsheghlien. Corrupted by their dark blood, their bodies twist to reflect their inner corruption. Many of the major villains and monsters are awnsheghlien. Examples include the Gorgon (stone-skinned with a petrifying gaze, perhaps the strongest creature in Cerilia), the Sphinx (an insane half-cat lover of riddles), the Spider (once a goblin-king who fought at Deismaar), and the Vampire (once a young hero who killed a blood abomination named the Sinister and thus became corrupted himself).

Because bloodlines allow scions to collect regency the Birthright campaign includes a set of rules for players to participate in the "domain level" of play. That is, their characters can control various types of large scale organinations. Those who rule such organizations are called regents. They are able to use the power they gain in the form of regency to manipulate events in and around their domain.

Domains are made up of provinces and holdings. Provinces are the basic political unit of the domain level. They represent the actual land, population and natural environment of a domain. There are four types of holdings; law, temples, guilds and sources. Law holdings represent the legal authority of regents in the province while temples and guild holdings are the religious and economic aspects of a province. Source holdings represent the magical energy contained by the natural environment of a province. Both provinces and holdings are described using levels.

The size and shape of provinces varies significantly in the published materials, but they average roughly thirty to forty miles across. Provinces have a population level (a number from 1-10) that has several effects on play. Regents collect regency (RP) based on the population levels of the provinces they control, and the population level determines the maximum level of law, temple and guild holdings in that province.

Both priest and wizard characters are able to utilize their holdings (temples and sources, respectively) to cast realm spells. Realm spells are large scale magic that can affect entire provinces. They are often costly both in terms of gold and regency.

The primary races of the Birthright setting are typical for Dungeons and Dragons based game-worlds: Humans, Elves and Half-Elves, Halflings, Dwarves. However, there are some differences between the races presented in Birthright and those in other campaign settings or in the core rules. Also, non-human races do not exist in the variation that they exist in other settings. That is, there are no Wood Elves, High Elves, Gray Elves, etc.

Other races are notably missing from the setting. There are no Orcs, Half-Orcs, Kobolds or Gnomes. (At least, there are none presented in the original materials as character races.)

Humans are split into five distinct subraces, each representing a different culture:

As previously mentioned, there are no orcs or gnomes in Cerilia. Note: Gnomes are on the list of "AD&D Monsters in Cerilia" in the Birthright Rulebook. However, that is the only time the race is mentioned in the campaign setting and may have been an error. It is unknown if these (or other races) exist elsewhere on Aebrynis.

During its four-year run, 25 roleplaying products and five novels were published by TSR, as well as a computer game by Sierra On-Line. The line was suspended before the publishing schedule was complete. By the time Wizards of The Coast had cancelled the line after buying TSR, they had published the following: 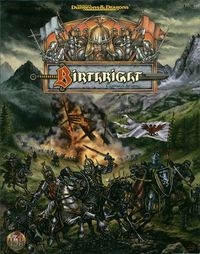 The original cover of the Birthright Campaign Setting

In 2005, to celebrate Birthright's 10th anniversary Wizards of the Coast announced the free web release of a series of published and unpublished Birthright products at free downloads, including the novel The Falcon and the Wolf by Birthright creator Richard III Baker, although only the first few releases were actually published.

At the time of this writing, Wizards of the Coast is not publishing new Birthright products. However, a version of Birthright is being constructed for use with the Revised Third Edition of Dungeons and Dragons rules (also known as D&D 3.5e) and hosted at Birthright.net. This group project is collaboratively structured over the Internet, and recognised as the official updated version of the setting by Wizards of the Coast. Several downloads of the updated setting are available for free on that site as are other campaign materials and an extensive message board.