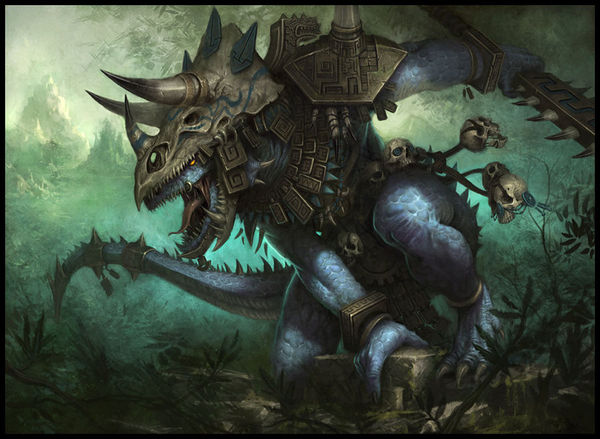 Creatures of awesome and tyrannical strength-- representing the ordained nature of the dragonborn, while recklessly unleashing the power of the dragon within itself. Corrupted by Tiamat, they vow to do her bidding upon the lesser dragon-kind-- battling the greater wyrms with weapons of steel-like scales.

A bestial reminder of their unchanged past, the greater champion possesses some of the qualities of the normal champion with a few powerful attacks. Namely, its bloody reputation for dealing lots of damage to a small area and scoring brutal hits against their targets make them a fearsome creature even to the mightiest of fighters.

The most brutal and bloodthirsty creature ever to exist. Its mere presence sends jolts of fear into their spines, as they helplessly watch this creature devour their allies one-by-one. Their brutal nature allows them to attack with staggering accuracy, and their rage increases as they become injured. The more they kill, the more they prosper.

Tactical monster that prefer the shadows, they are cunning killers-- waiting to ambush their prey with their sheer size and unnatural agility. Their large size doesn't hinder their ability to hunt like rogues, as they are specially trained in the way of stealth and quick attacks. They are mostly accompanied by a couple champions or a darkblade to exploit as a distraction.

The Dark Sultan is the shaman of the abominations and a critical threat to the dragon nation. This tyrannical beast is no ordinary shaman-- it uses the souls of others to fuel its rage and to grant its allies temporary boons of power. Most of the time, it uses these souls to harry their foes, causing them to lower their guard to be able to focus on the defensive.

A character knows the following information with a successful Nature check.

DC 25: Tainted by the order of Tiamat and her laws, the dragonborn abominations are creatures of pure rage and bestial savagery. They are the barbarians of the natural and supernatural worlds-- tainting the minds of other dragon or dragon-like beings to follow the order of Tiamat and using some as personal slaves. When they get into combat, the abominations do not fear anything, and will do anything in their power to kill or force the intruders to retreat. Some like to kill and devour their fallen as a reminder to keep away from their trusted lands.
DC 30: With the downfall of the High order, the abominations were created as the shock-troops to the Dragonborn armies. When the army was defeated, the abominations left to find sanctuary from war that had tainted their minds and caused them to become easily susceptible to corruption-- and that was why Tiamat was able to take hold of their numbers. She gave them a chance to redeem their worth, as a part of a dark army to sway the world to her side and to round up a larger army of dragons to strike fear into the very hearts of the mighty kingdoms.

Dragonborn abominations, for their namesake, are very powerful creatures. Encountering these beasts may result to death of a couple party members. It is best to fight these creatures at higher levels, but generally you want to keep an eye on them, lest they make a move you were not ready for.