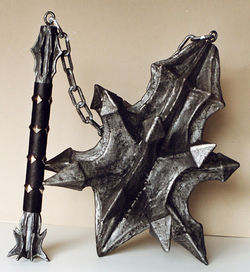 Essentially a sharply flanged, torso-sized lump of semi-solid cast steel attached to a heavily reinforced chain, just having strength and a well trained body is not enough to use this monstrous weapon in battle. For any fighter untrained in such matters, simply swinging a gigas flail around requires a DC 20 Strength check, as its massive weight and momentum seeks to throw you off balance, and failing any such check by 5 points or more causes any aspiring wielder to not only fail his attack automatically as on any failed check, but also makes him neatly faceplant the ground and become prone for the remainder of the round. Fortunately, there is an effective way to gird oneself against the massive centrifugal force a swing of a gigas flail generates; you gain your armor check penalty as a bonus to any Strength checks made to swing this weapon. Many of the greatest flailmasters purposefully clad themselves in heavy gear and equipment, weigh themselves down to a heavy load, and spin around like a giant, heavily armoured spinning top until everything living in the general vicinity is like so much chunky salsa dip on the walls.

Those without the prerequisite Exotic Weapon Proficiency can only get off a single attack as a full-round action. Those who are proficient can not only use it, but the Strength DC for performing an attack becomes 15 and they gain access to the following attack options. Do take note that even for someone with the right Exotic Weapon Proficiency, a gigas flail is ungainly. The wielder of a gigas flail requires at least 5 feet of clearance on all sides to be able to use any of the special attacks listed below. Fortunately, creatures do not count as obstruction unless they are at least two sizes larger than the wielder, but walls, columns, or Large size or greater objects such as heavy furniture do.

Just Keep Swinging: The wielder of a gigas flail attacks by swinging at his foes, and then swinging again, and again, until what remains of them can fit quite comfortably in a pizza box. The force of the flail is so dangerous that even missed attacks will carry over a portion of their momentum into the next swing. When performing a full attack action, any missed attack adds the flail's base damage (+4d6 for Medium sized gigas flails) to the damage of the next attack. This effect stacks, but the accumulated bonus damage resets to zero at the end of the wielder's turn. The wielder may also choose to perform attack actions against thin air to 'miss' and create this effect at will without necessarily needing to attack a target, such as when he needs to break through massive amounts of damage reduction or wants to wind up to smash through a wall or a barricade in a single go.

Spin to Win: The power of the gigas flail lies in its insane centrifugal force. If no solid surface is there to stop the flail's motion, it will keep accumulating more and more speed and power. Starting this ability requires a DC 20 Strength check (modified by armor check 'bonus') and a full-round action. While spinning, the wielder of the gigas flail gains cover against ranged and reach attacks and makes an automatic attack roll against any creature that occupies any square adjacent to him.

When Spin to Win is active, the wielder continues to spin out of turn, and needs only sacrifice a standard action during any subsequent turns to maintain the spin for another round. Out of turn while spinning, the wielder makes an automatic free attack roll against any creature that enters any adjacent squares, and provided he has iterative attacks remaining, he may make additional attack rolls out of turn whenever a creature attempts a melee attack against him from any adjacent square.

Maintaining the spin however is excruciatingly difficult, even for the strongest and most heavily weighed down of warriors. Every subsequent round, the DC to maintain Spin to Win increases by +2. The wielder becomes staggered at the start of his turn when ending his Spin to Win voluntarily, or nauseated for 1 round instead if he stopped it due to failing a Strength check.

The wielder may move up to half his land speed as a move action per round while spinning to win.

Smasher of All Things: A gigas flail can smash into things with intense momentum, and sometimes, smashing into things creates useful side-effects. As follows:

The gigas hammer requires Str 17 to wield in the first place, with a -2 penalty on attack rolls. At Str 21, the penalty to attack rolls vanishes.