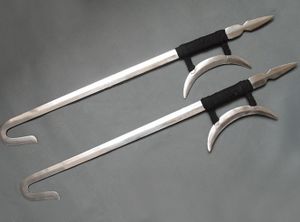 A pair of shuang gou, otherwise known as hook swords.

See here for the Wikipedia article on hook swords.

Hook swords (otherwise called Shuang gou, fu tao or simply gou) are relatively modern Chinese weapons that were predominantly utilized by civilians, but traditionally associated with the Shaolin Monks of Mount Shaoshi, China. They consist of a long, straight blade that ends in a hook, and a outward facing crescent hand guard that serves both as protection for the weapon hand and as a secondary weapon. As such, they are considered double weapons. Weapons such as these could have a firm basis within oriental themed civilizations of fantasy worlds.

Special: You may use a hook sword normally as a martial weapon. You only get access to the bonuses and special attack options listed below if you have the proper Exotic Weapon Proficiency. Hook swords also count as monk weapons and can be used in a flurry of blows.

You may attach the swords by the hooks allowing you to treat both weapons together as a single reach weapon, but you can still attack enemies adjacent to you as with a normal weapon. Joining or separating the swords is a swift action.

While wielding two hook swords, you gain the benefits of the Two-Weapon Defense feat. If you have the feat already, the bonus from it is doubled.

Due to the design of the weapon, it affords a +2 bonus to trip attacks and disarming. These bonuses increase to +4 is two hook swords are wielded.

If the wielder of a hook swords is stuck in a grapple, he may still use the secondary attack - the crescent hand guard or the sharpened blade extending from the stock - in order to perform melee attacks against his grappler at no penalty.