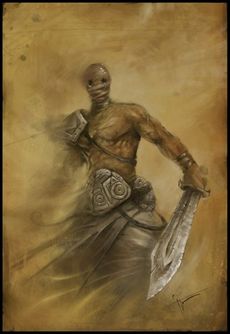 This horrible creature howls like malignant crypt winds, and oozes a smell of death through its porous form. A whirlwind of biting dust swirls around it, eroding the very life of those that venture too close.

Revenants are the spirits of the evilest and most horridly ambitious of mortals, given form by their wretched undying desires. Appearing as grey or ochre-skinned humanoids, a large amount of sand and dust has been accrued and compacted into a grotesque semblance of its former self. Revenants stand about 6 feet, and weigh 250 pounds.

Above all else, revenants wish to live again, to supplant their transitory body moulded from grayed dust for a real, living form. Their torture is in knowing but being unable to accept that they are forever doomed to take this cursed shape, and as such harbour towards any living creature a vile, envious hatred that defies description.

A revenant's natural weapons and any weapons it wields are treated as evil-aligned for the purpose of bypassing damage reduction. This includes its swarm damage. A revenant's +1 unholy bastard sword is a product of its vile animus and is destroyed when the revenant is dispersed or destroyed.

Dust Vortex (Su): As a move action, a revenant can create a whirlwind of dust around its body that extends in a 10-foot radius and lasts for one round. The dust vortex may be sustained for more than one round, but this expends a move action every round, meaning that the revenant can only take a single move-equivalent or standard action every turn while it is active. A revenant can not make weapon attacks whilst in vortex form. While in vortex form, its hover speed becomes a fly speed.

Those caught within the vortex are damaged as per the revenant's swarm attack (see below) as the dust particles eat away at their very flesh and attempt to subsume it into its own physical form. For every round of direct exposure to the vortex, a living creature must make a DC 18 Fortitude save or be drained of 1 point of Constitution. The save DC is Constitution based.

Regeneration (Ex): Acid, positive energy effects, spells with the Good or Light descriptor and divine damage sources (such as from the flame strike spell) deal normal damage to a revenant. Due to its semi-corporeal nature, a revenant cannot lose any limbs, as any physical injuries are insubstantial to their dust and sand-formed body.

Swarm (Ex): Revenants bear many traits attributed to swarms. Comprised of countless miniscule particles of sand and dust that accrete into a humanoid shape, a revenant is immune to all weapon damage, although it is not immune to the added energy damage from a special weapon enhancement such as flaming. When in its dust vortex shape, a revenant has a swarm attack that deals 4d6 damage. A revenant in dust vortex form does not gain a swarm's Distraction special attack. Unlike swarms, a revenant never takes increased damage from area effect spells.

Spirit Entity (Ex): A revenant's body is held together by the effort of a controlling soul that can only be exorcised or destroyed with a few powerful spells or under certain special conditions. If brought to 0 hit points by effects that bypass its regeneration, or successfully targeted by effects that would destroy it outright, such as the undeath to death spell, a disruption weapon or a sufficiently potent turning, the revenant is merely dispersed for 2d6 minutes only to return afterwards with its hit points restored.

The traditional method of slaying a revenant is finding the remains of the person the soul belonged to in real life. When confronted with a piece of its shed mortal coil, it becomes vulnerable to final death and can be destroyed normally by effects that bypass its regeneration. Otherwise, only a wish or miracle will be able to lethally damage as well as permanently destroy a revenant.

It is possible to entrap a dispersed revenant using the soul bind spell in conjunction with a bottle of unholy waterSpC. This imbues the unholy water with the essence of the revenant's rotted spirit, turning it in an utterly black liquid known as blackshadow elixir. When ingested or used as element in a magical trap, the blackshadow elixir bestows 2d4 negative levels (3 uses). If the victim of the elixir dies from level loss, its soul will be forcibly removed from the body and will turn into a newly born revenant in 1d4 days.

When drank by an undead, it grants permanent fast healing 5. When the elixir is applied to a weapon with at least a +1 enhancement, that weapon permanently gains the unholy enhancement. The market price for a bottle of blackshadow elixir is 16,000 gp.