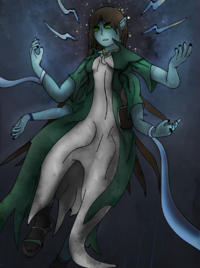 The safir are a mystical people of great psychic power, often orthogonal to the machinations of the stillminded world. They live in places of ethereal beauty, in expansive plains or ancient petrified forests or crisp beachheads, crafting great artistry and cultivating the gardens that are their minds.

With their exquisite figures, graceful motion, and reserved yet empathic nature, safir appear hauntingly, yet extraordinarily, beautiful to humans and to more than a few other races. Safir are well-known for their blue blood, and for the light blue hue that it imparts upon their skin.

Safir are unique among the known sentient races in that they have three sexes: female, male, and a sort of in-between known as azhar, who, while looking outwardly female, can sire children as well as bear them. They are also unique in their unequal sex distribution: for every 36 children, on average, there are 25 females, 5 azhar, and 6 males. As well, the resting body temperature of safir is lower than humans; however, they can consciously modulate their body temperature via meditation. Male safir are rarely seen in public, due to their scarcity and their closely protected nature, while, aside from height, it is difficult for an outsider to tell an azhar safir apart from a female one.

Female safir range from 6 to 7 feet tall, males from 4¾ to 5½ feet, and azhar from 5½ to 6¼ feet. All safir have pointed ears, like elves. A plurality of safir have brown hair, but all manner of hair and eye colors are possible; they have no facial and little body hair. There is great variation in hairstyles among safir, but longer hair is usually indicative of higher social class.

Excepting a general lack of nudity taboo among safir, their usual form of clothing is a long robe that is close-fitting around the torso but loose and flowing at the sleeves and around the legs, which can be found dyed all manner of colors — though cool colors are more common — and printed with many different patterns, commonly geometrical, abstract, or nature-based designs. Safir who have blended into elven or human society may wear the costume of their adoptive homeland.

Typical adventuring gear for this people includes flat- and recurve bows, curved swords made from a strange, beautifully patterned steel, various forms of polearms, and crossbows.

Safir are torn between their soft, reserved nature, and their natural empathic powers, along with the resulting inclination to give into their emotions, especially when in the company of others. Their long lifespans, however, of well over 400 years, afford them ample opportunity to partake of both extrema.

Safir, by their psychic nature, are flexible and pragmatic, loath to let themselves become affected by petty happenstance and desirous to resolve conflicts diplomatically before raising a sword, or a mind, against their sisters. To this end, their cities are well fortified by means yet unknown to the Unawakened, and many a prospective raiding party have found themselves suddenly lost, back where they started, or turned against themselves when marching thereon. Should, however, the need arise to defend themselves, the safir are keen inheritrices of a proud martial tradition that has persisted for untold millennia.

It is not unheard of for a safir to go her entire life without speaking a single word. Those that do speak, however, do so in a mellifluous, enchanting language called Āirumāli, or in one called Īnēmāli, which is more akin to birdsong than any other known language.

Safir are naturally telepathic and empathic, innately able to feel and share their emotions and thoughts with one another. This has led to an interesting dichotomy: some safir prefer living in cities with their fellow psychics, while others find the presence of so many Awakened anathema, and have taken up residence in the countryside, far from prying minds.

Most safir are agriculturalists of some stripe, whether commanding fish farms or rice paddies that can be measured only by the square mile, or growing fruit and vegetables in a rooftop garden. The way of the artisan is also well-trodden among their kind, and they are well-known for their fine clothing, jewelry, and art, though they produce almost exclusively for their own consumption. Those precious few that do export their goods, however, trade them for exotic spices and for silver, which, despite forming the backbone of the safir's currency, is chronically in short supply.

Safir encountered outside their own lands are often traveling artists or sages, or artisans that wish to take truly fresh blood into their craft. It has been known for human and elven nobles to enlist the service of safir magesses in teaching them the ways of the mind.

The most common reason for safir to take up adventuring is out of wanderlust, and a desire to explore and discover. They also enjoy exercising their martial and supernatural power, and adventuring grants them the ability to do so at often minimal risk to others. Safir greatly, too, despite the collectivist nature of their society, value freedom, so they will often take up careers that allow them to travel and set their own schedule. For the same reason, it is not uncommon to see them taking up arms against oppression, corruption, and decay, or what they perceive thereas.

Safir are considered children until initiation, the details of which are a tightly guarded secret, aside from that it takes place in the child's teenage years, usually on or shortly after their forty-eighth birthday, and involves their first, and sometimes only, haircut. Child safir names are as often meaningless babble as they are words, but adult names, and especially adult female names, are meaningful, closely treasured throughout the generations, and often long-winded.

Various safir societies may also impart on their members, in some combination or order, a family name, a matronymic, a caste name, and a locative. The given name(s) usually come(s) after the family name and/or matronymic.