Alignments are a tricky thing. On one hand, they have years of tradition behind them, defining characters for years, and have become a sort of a sacred cow. On the other hand, there are many problems with them, as they tend to create shallow characters that do not express a person entirely. Finally, they cannot easily be done away with entirely, as they are integral for a number of game mechanics.

This variant attempts to fix these problems by switching from alignments towards more complex ideals while at the same time putting mechanics into play that give a small incentive towards players who play their defined alignment. 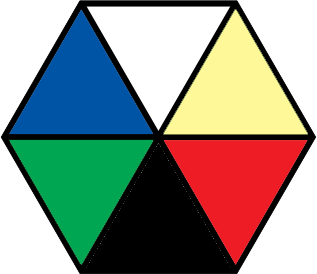 The color wheel for alignments, which can be seen on the right, has six sides, each represented by a different color.

Black - Alone Against the Odds[edit]

Starting at the bottom of the wheel, black is the color of independence, the willingness to see things through to the end without the help of others, and the unwillingness to be enslaved to the laws that govern others if they clash with your own ideals. Though shared both between monstrous tribes of humanoids, murder-happy hobo adventurers, and various outsiders, each one tends to express it in a different manner. It is important to note that the shopkeeper intent on making a profit and the darkest demon can both be black, but express it in very vastly divergent ways.

On the opposite side of black is white, the color that represents unity, togetherness, and the whole being greater than the sum of their parts. The flip-side of black, one might think that all beings of white are pure and care for the well-being of others, but this would be a mistake; those who would see every blade of grass be cut to a uniform height, preventing any from reaching their potential are white, even when it would mean the death of hundreds or even thousands of their countrymen as long as those remaining cleaved to the unity created.

Whereas white and black were the dichotomy between the well-being of the individual over the well-being of the group, the axis between blue and red pits reason against emotions. Blue is just that--rationality and reason, excluding those emotions that would interfere with the thoughts that guide one's actions. But as good as that may sound, those who are too tied to this section of the color wheel tend to be cold and calculating, seeing other people as merely pieces on the board, and weighing them without ever considering what the others might feel.

The antithesis of thought is emotion, and that is what red contains; passion, feeling, and the desire for the reactions of the heart, rather than those of the mind. People marked primarily by red tend to run hot, jumping to action and allowing their temper to run away from them even when it would not be the best thing to do. However, they also tend to be warmer people, who stand by those they've connected with not because they believe in some far ideal of the group surviving, but because of the connections they've made and the feelings they share with others.

Thus far the axes have covered independence, interdependence, thought, and emotion. But there are those who view their own actions, and those of others, through the lens of nature vs. nurture. Those who see the world as not only able to be changed, but even that it should be changed regardless of the consequences, tend towards the yellow end of the color wheel. These tend to be inventors, politicians striving to see the laws change, and scientists ever pushing the edges of their knowledge in order to force the world to be different, for better or for worse.

Green - The Traditions We Hold Dear[edit]

Finally, we come to green, which is the opposite of yellow on the color wheel; green represents tradition, as well as allowing nature to take its course. Those who tend towards green often have an acceptance of the world, living with few expectations of how things should be, and instead accepting how things are. They tend to be the guardians of history and tradition, looking to the past to gain insight on the present conditions. However, they might also be insular, and unwilling to change simply because "that's the way it's always been done".

When creating a player character, choose two non-opposite colors to be your character's positive traits--that is, the ideal that they strive for. This means you could choose, for example, black and red, white and blue, or green and white, but not white and black, blue and red, or green and yellow. Whenever a character makes a skill check whose purpose it is to advance their ideal, that is, a positive example of the color, they gain a +2 bonus to that check.

On the other hand, player characters are also flawed, and sometimes give in to their darker natures, allowing the temptation to influence their actions. Characters choose a single color as their vice, demonstrating their less pure nature. This color can even be one that they chose as one of their positive colors, as ideals can be twisted and corrupted into something their believer never imagined themselves able to do.. Once per day when making a skill check that advances a negative aspect of the chosen color, they may reroll the roll before results are announced.

This gives the character a core set of ideals, a lens through which they view the world, and one that influences their ideas and actions. Note that some colors may have similar aspects, but in the end these are only symptoms that appear to be the same, their root being very different. The DM is the final arbiter of whether a specific skill check works towards a character's color or not, and is able to gain the bonus or reroll.

Mindless creatures and those with an Intelligence less than 3 tend to be colorless, neutral under this system and don't have any color whatsoever.

Certain characters, such as the paladin, strive for a single idea. Such characters have only one positive color, but their bonus on skill checks doubles to +4 when making skill checks that advance that color in a positive manner.

Abilities within this system consider opposite colors as alignments. For example, a paladin may be of any color, since all of the colors have positive aspects to them. Their Smite Evil ability works on characters who have the opposing color, as does their Detect Evil ability and the like.

It is quite easy to adapt the alignments enclosed within the color wheel to just about anything. One possibility that might come up often is to have characters uphold nations or organizations they favor, rather than ideals, though this tends to be a little nebulous once it comes to outsiders and the like. Despite this, by changing the specific colors to various affiliations, one can adapt this system to work differently.