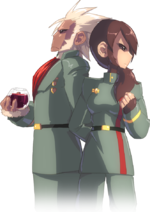 "Carry on about your day, citizen. Big Ape is watching you."

The Apex used to be a very human-like race, perhaps even once humans or elves, until one day a very real magical curse was destined to doom them all! Fortunately for them, their leaders, known as the Miniknog, had their leading alchemists synthesize a "cure potion" that totally stopped the curse, which they spread through the local water supplies. The price for this was slight devolution that caused the populace to more closely resemble apes in appearance, but also conveniently increased the populace's intelligence, which definitely wasn't their intention. As a result, science, alchemy, and magic study further advanced, pushing the Apex to the forefront of such fields.

Within merely ten years, the VEP (Vestigi-Evo Process) potion had successfully spread throughout the entire race. During this time, society was... "restructured", and all records of their race predating this event were obliterated in their entirety, and Big Ape, the leader of the Miniknog, took over for the "safety and security" of the people. The Miniknog dictates every aspect of the race's lives; what they eat, when they sleep, who's popular on television, fashion trends, and who "volunteers" for their various gruesome experiments. The watchful eye of Big Ape is spread all over every Miniknog-governed town and city, with all sorts of spies and magical detection spells scattered throughout. As of the present time, not even the Miniknog itself knows how long society has been like this for, let alone the citizens, but it's pretty clear that some aren't so happy with this system...

Within recent years, rebellions have broken out all over. In fact, the number of rebels almost outweighs the number of "average" citizens. Rebel camps tend to be shoddy, made up of bunkers, small tents, watchtowers, and lots of barricades and storage crates. These crates, often strewn around the camp and packed into bunkers, are loaded with any supplies they can scrounge up; food rations, modest weapons, weak scrolls, light armors, potions of all kinds, coin, and just about anything else that may hold use. There are always rebels out and about at any time of day that keep a watchful eye on these crates, and there isn't a single rebel who isn't armed to the teeth, so stealing from them is highly advised against.

Apex that aren't shaped by the rebellion tend to be act superior toward other races and those lower on the societal ladder than themselves, with interns often treated as little more than slaves in the research departments, and "volunteers" are given no respect whatsoever outside of the rare bit of sympathy shown by a scientist or two, which is rarely expressed outwardly as anything more than increased patience thanks to the ever-present watch of the Miniknog. They've often been raised to distance themselves from others, giving them a scientific and somewhat cold disposition, rarely expressing any sort of passion.

The rebels, however, have broken away from the societal norms that the Miniknog has shaped in the people. While still tending to display somewhat of an air of superiority, they have learned to treat everyone with respect, as they are all outcasts in some form. They are often much fiercer and are passionate about their cause. Some still find it hard to break away from the old ways, of course, but treating anyone poorly for their rank or race is severely reprimanded, so even the few that aren't trying to change out of a change of heart at least do so to avoid punishment. This view on others has even led them to occasionally accept members of other races into the rebellion, many of whom tend to be adventurers, and one might even find a whole career in fighting against the Miniknog. However, as the eyes of the Miniknog are everywhere, it may prove difficult to get the rebels to trust you, even if you're Apex as well.

Apex are slightly taller than a human being on average, as well as a bit more muscular. They essentially resemble a typical ape, only with proper humanoid posture. Their faces have a prominent eyebrow ridge, and males and females alike have facial hair, which is often dyed by the general female population, though due to lab protocols and dress codes, the higher-up females never do this.

As previously stated, the Miniknog has little respect for other races, as well as any others of their own race that are beneath them. Rebels, however, treat any race with equal respect, usually seeing them as individuals rather than members of some generalization. This sometimes even applies to monster races, and monsters who wish to integrate into more "civilized" cultures may join a rebel camp, despite the risks involved and the tough conditions. However, they have a general distrust of anyone that isn't a known member of the rebellion, regardless of race. Prove yourself among them, and they'll treat you like family.

You're either with the Miniknog, or against the Miniknog. There is no in-bewteen. While there are occasional neutrals, with the few tending toward lawful neutral, in most cases, they're either lawful evil, or chaotic good. In the rare instance of an Apex being raised outside of both the Miniknog and the rebels, they will tend toward lawful. Technically, an Apex under the Miniknog can be "good", in which case, they do trust and believe in the Miniknog, and think it to be a force for good. Specifically, Rebels cannot be evil, and Miniknog cannot be chaotic. The extremely rare chaotic evil Apex is very likely to be terminated quickly and efficiently.

Apex can be found almost anywhere, but tend to prefer cold, arctic climates, with their fur providing ample insulation. Miniknog civilians tend to live in apartment-like buildings with a renaissance theme and plenty of Big Ape propaganda posters plastered along the walls. Often, objects like teddy bears and other decorations will have magic items enchanted to allow the Miniknog to watch their citizens from any and every angle, as well as monitor anything else they can about them. If there isn't already some enchantment to monitor something, chances are the Miniknog is working on it.

Miniknog science is such a focus that entire town-sized lab complexes exist all over, home to scientists and Miniknog higher-ups. One would find scientific, alchemic, and magic implements organized neatly all over the place on futuristic-looking metal shelves. If there were anywhere to throw in a gunslinger as a one-off in a world that otherwise wouldn't know of such technology, an Apex lab would be the perfect place for it, as the tech in one of these labs is likely to be well ahead of anything else one would otherwise see in the world. Electric power and even computers wouldn't be unlikely sights, for example. Depending on exactly how advanced The DM wants them, they may even have life support tanks full of all sorts of abominations; mutants, hybrids, perhaps Outsiders, and even entirely new creations.

Rebel camps are quite the stark contrast to the upscale apartments and clean laboratories that the Miniknog controls. Many are disheveled, somewhat disorganized, and usually quite visibly rushed together. Most homes are underground bunkers, as well as storage houses for supplies. Whatever supply crates aren't crammed into a storage building or even into someone's home are strewn across the camp. Chairs are usually cheap metal ones salvaged from Miniknog towns or poorly crafted wooden ones, if not just a crate. Same applies to most of the "furnishings". There are often tents and campfires strewn about the place as well. Watchtowers are built here and there in order to give warning in case a Miniknog legion or some similar threat invades, as well as to alert anyone to the presence of an adventurer party or other visitor. Comfort items and decorations are few and far between. Usually someone might only have one or two personal items, and the closest thing to decor might be a few defaced Big Ape posters that the rebels find humorous.

Being highly scientific-minded, it's extremely rare for an Apex to worship a deity, especially since the Miniknog won't allow it, although unsurprisingly there are a few who revere Big Ape himself as one, and a few rebels will take one mainly out of spite. Those who do worship Big Ape call themselves the Minds of the Miniknog, and consider the Miniknog themselves to be both angels of Big Ape, and extensions of his will and being. The Miniknog merely tolerate these groups, as they keep a few in the service of Big Ape and tend to be quite small, anyway. However, a couple are fanatical, but hardly pose a threat, and are quickly terminated before they start to cause issues.

Apex typically speak common, but can easily learn other languages.

Apex typically have similar names to humans. One particularly famous rebel is Lana Blake, for example.