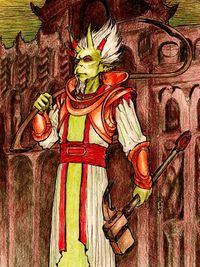 Tall, slender, and looking like the riddles they speak, the dabus are feared by some to be the true masters of Sigil, the hidden genius of her being. For others they are nothing but slaves that maintain Sigil’s mighty engines. Their thoughts literally fill the air when they pass, for the dabus’s speech is illusion shaped into pictures that mortals can then reshape into sounds – the dabus communicate not by word, but by the complicated structures of the rebus. These are the ultimate in thought-pictures, where symbols are chosen for the sounds made in a language, and the sounds are strung together to form words.

Sigil is their sole habitat, which they constantly build, cannibalizing one part to construct another. It is known their homes are in substructures far beneath the city, but few have seen them. They don’t care for visitors in their cramped workshops, and they mislead those who try to follow them home without permission.

The dabus claim to be organized into cells (if their rebuses are read correctly). Each cell has a duty in the city, though it is not tied to one place or skill. One day a member of a cell gathers the trash that blows out of the Great Bazaar. The next, it might be resetting cobbles near the Hive. Whatever guides them in their tasks, the dabus seem to always know what is expected of them. Each cell has 2d6 members.

All dabus are of the same sex, for the race appears to have no sex at all. There are no dabus young, yet they do seem to be able to replace those lost to accident or misadventure. No one is sure how they do so, but the best guess is that a new member is constructed from the merged illusions of the others, that the word-pictures take on real form, that what is written/spoken has reality for these creatures that translates into reality for others.

That leads to their strange speech, the most puzzling aspect of the dabus race. They have mouths and seem perfectly capable of speaking, but they never do. Instead, should they desire to communicate with some one not of their race, images of appear in the air. The images are the picture equivalents of sounds that match whatever language the onlooker speaks. When a dabus is excited, the rebuses can flicker by with dazzling speed.

There is no doubt the dabus have a role in Sigil. They are its cells, constantly repairing the body of the city. It is hard to imagine what would happen to Sigil without them, for no one really knows the full extent and workings of Sigil’s streets and furnaces.

The dabus are not combative creatures. They seek no battle, as destruction is not their role and purpose in life. Still, in a city like Sigil, avoiding combat is not always possible and the dabus will fight if they must. The dabus possess no special attacks. They can only fight normally, with swords, hand axes, or hammers – the latter two being tools they often have at the ready.

Hover (Ex): A dabus floats off the ground, in a manner similar to flight, save that it cannot hover higher than it's natural reach. A dabus is unimpeded by any sort of terrain provided as it is sufficiently level to not possess outcrops taller than its reach. Though they are in the air, they are not considered as such for effects that interact with that (like wind effects).