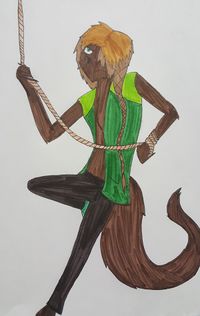 Tall and lanky, this race is covered from head to toe in thick fur that varies in shade from black to white with various shades of brown and gray in between. They have long dexterous fingers and short paws for feet. The females generally have larger manes than the males. They have thick tails used for balance and expression. Of note is that they have no external ears, only ear holes.

The history of the Djin is a long and sordid one. After evolving to live on the plains above the deep forests, their most recent conflict revolved around the color of magic each Djin possesses. These wars lasted for several hundred years, and only recently has a peace been negotiated. There was once a caste system based on magic color, which some old Djin still refer to when thinking of who to listen to. From top to bottom, the system was as follows, Blue, Green, Silver, Orange, White, Black, Red, Indigo, Yellow, Pink ,Violet ,Brown. While there is still some prejudice, it is less prevalent within those adventuring groups that delve into the deep forests, where a wide variety of skills has always been needed.

Djin live in objects that they carry with them. They can go inside an object at will. Their communities are often large family groups that live inside a hut that is a common area with shelving for the objects.

Djin have an interesting romantic structure that differs from that of humans, the three romantic setups are.

Djin are a varied race with many personalities, though there are stereotypes that follow each color of magic. From those with green magic being kind healers, to those with violet magic being violent and incautious, there will always be exceptions and those that follow these stereotypes to the letter. The main trait that all Djin share is their desire for community and ability to form strong bonds with those around them, particularly those who will go through danger with them.

Djin often go out to explore the deep forest while they are relatively young and strong. It is seen as a right of passage, a way to truly reach maturity with lifelong friends. Some come out of this time of their life with a lifelong thirst for adventure and the companionship found therein.

Another kind of adventure one might find is an exiled Djin, one that is permanently bound to an object until they can do a great favor to one that would release them.

Djin had many languages once, with the merging into one common language for the Djin it has become common practice to give names that have words from the old languages as names as a way of keeping history alive.

Creature Type. Humanoid
Ability Score Increase. Dexterity +2, Constitution +1
Age. Djin reach adulthood at roughly 20 years and live to be 120 years old on average
Alignment. Typically Djin are Lawful Good
Size. Your size is Djin vary between six and seven feet tall, your size is medium..
Speed. Your base walking speed is Your base walking speed is 30 feet. Your speed over grassy plains is 40 feet feet.
Low Light Vision. You can see normally in low light conditions and see in the dark as if it were dim light
Home is Where the Heart is. You can move in and out of your chosen object as a free action. The inside of this object is customizable and roughly the size of a small home. If the object is destroyed you are expelled from the space within and all objects being stored within are destroyed.
Languages. You can speak, read, and write You can speak and write Common and Djin

Every Djin can use a different color of magic. Once per short rest, they can use one of the following spells based on the color of their magic and can often do small things related to the theme of their magic ( Dungeon Master's discretion )

When creating a Djin character, you can use the following table of traits and flaws to help flesh out your character. Use these tables in addition to or in place of your background's characteristics.