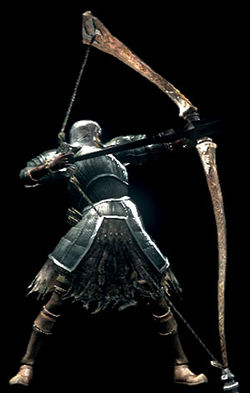 A greatbow designed to take down dragons.

Men from civilized lands often deride the greatbow as an insipid tool, far too cumbersome to wield even with the strength one can expect from a trained soldier, though these massive bows came into being out of necessity. Originally created to pierce the armour of huge beasts that regular bows could not dent, the greatbow sees good use on the very fringes of civilization. In such lands where ranged defense against dangerous creatures is vital, the young men with the greatest physical strength are subjected to strength training and archery practice for the specific purpose of becoming greatbowmen. Such specialized warriors are given gauntlets that increase their strength to enable them to wield their greatbow. Humans that can operate a greatbow without such aid are rare indeed, as the Strength requirement to wield and fire a greatbow is 20.

Greatbows hit with incredible force, and this kinetic energy can manifest itself in a variety of ways. As such, greatbows have a knockback rate.

The knockback rate of a greatbow equals the modifier of the Strength score required to wield it (+5 for a regular greatbow), plus half of the wielder's base attack bonus. For every range increment after the first, the greatbow loses 5 points of knockback, to a minimum of 0.

Any target hit by a greatarrow fired from a greatbow is effectively bull rushed at a modifier equal to the greatbow's knockback, and if pushed back 5 or more feet as a result, he must make a Fortitude save (DC 10 + knockback) or be knocked prone.

A greatbow fires greatarrows, which are massive, heavy projectiles whose size and thickness are several times that of the bulkiest arrow, and that are often designed to penetrate, crush or impale their targets. Firing a greatbow functions as per the Siege Shot feat, requiring a full-round action to nock the bow string and loose the greatarrow and dealing 1d6 points of extra damage per point of base attack bonus at triple the weapon's natural range increment (240 feet, in case of a standard greatbow).

A creature that tries to operate a greatbow without Exotic Weapon Proficiency does not gain the benefits of Siege Shot, greatly reducing the damage and range of the weapon but still requiring a full-round action to fire it. If the wielder of the greatbow has both Exotic Weapon Proficiency and the Siege Shot feat however, he may fire the greatbow without the Siege Shot penalty to attack, and the extra damage per point of base attack bonus increases to 1d8.

A greatbow improves differently from ordinary magical weapons. A magical greatbow increases the wielder's effective base attack bonus for the purpose of dealing more damage and increasing knockback rate by an amount equal to the greatarrow's enhancement bonus.