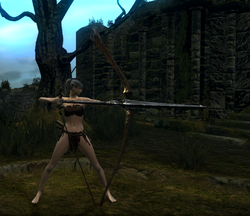 Greatarrows are frighteningly powerful projectiles designed to be fired with the help of a greatbow. Less of an arrow and more of a small lance in shape and thrusting force, a greatarrow is a 3 to 4 feet tall shaft capable of piercing the toughest dragonhide and smashing through the thick steel plates of siege engines. They are especially forged for the purpose of generating intense stopping power and penetration. Greatarrows are always masterwork.

Greatarrows are retrievable, though any greatarrow that has struck a surface or creature with a hardness or damage reduction greater than the greatarrow's hardness takes damage equal to the hardness of the object stuck. A damaged greatarrow can be repaired with 30 minutes of work, with the right tools and Craft skill, though a broken greatarrow (0 hp) requires half its price in goods and components to be restored.

Recovering a greatarrow from whatever hole it has punched in a creature, object or barrier requires a Strength check with a DC equal to the combined knockback rate of the greatbow and greatarrow used.

Ordinary greatarrows are fashioned from steel (hardness 10, with 10 hit points), weigh 5 pounds, and are valued at 50 gp a piece. For the purpose of applying the masterwork element, greatarrows are produced in batches of 10 (200 gp base plus 300 gp masterwork costs).

Greatarrows can be enhanced, similar to other magical ammunition. A magical greatarrow increases the greatbowman's effective base attack bonus for the purpose of dealing more damage and increasing knockback rate by an amount equal to the greatarrow's enhancement bonus.

Each point of a greatarrow's enhancement bonus adds 2 to its hardness and +10 to its hit points, as per with magic weapons. As such, magic greatarrows can withstand more punishment and be more easily retrieved as a result.

Greatarrows are as numerous as the dangers they are meant to eliminate.

Heavy Greatarrow: These greatarrows weigh 10 pounds and have 20 hit points, and increase the greatbow's knockback rate by 5 points. However, due to the heavy weight of this greatarrow, the range increment of the greatbow is halved.

Penetrating Greatarrow: Adorned with head flanges that cause rotation and penetrating force, this greatarrow has a hardened tip (+5 hardness) and pierces hard defenses, but peters out its momentum quickly. This greatarrow converts the greatbow's knockback rate into pure penetration power, not knocking back any targets but piercing them instead. The greatarrow's knockback rate is reduced by 5 points when it penetrates a 5-foot square occupied by a creature, up to 1 foot of wood, up to 6 inches of stone, or up to 2 inches of metal, and continues in a straight line until stopping inside the creature or object that reduces it below 0. Any creature or object with a hardness or damage reduction greater than or equal to the penetrating greatarrow's hardness will stop the greatarrow from penetrating it, regardless of the amount of knockback remaining.

A penetrating greatarrow requires an attack roll to be made against every creature and attended object (in order of penetration). Needless to say, a missed attack will not deplete the greatarrow's knockback rate.

A penetrating greatarrow loses all penetrating qualities after the first range increment.

A penetrating greatarrow ignores cover, unless the cover is created by a substance with more hardness than that of the arrow itself.

Finally, a penetrating greatarrow deals extra damage to large creatures, dealing extra damage equal to half the greatbowman's effective base attack bonus for every additional 5-foot square of its body penetrated by the greatarrow.