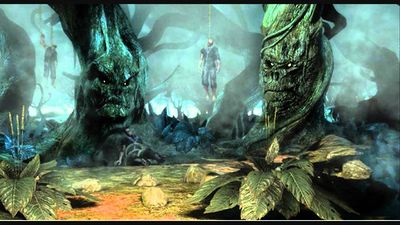 The forest has eyes...

"Standing before you is a large tree, with an evil face and a large glowing eyes."

The Ozzarbor is terrifying fiend that live in the dark forests of Hades, a maita it feast on the body and soul of those who dare entered it cold and desolated forests. The Ozzarbor look like a large tree without leaves, with an evil face and glowing eyes in it bark near the base. The tree actually has a digestive system and quickly turn bodies into mush, it also extremely hard to kill, making freeing souls inside of it difficult.

Luckily, these evil trees are almost immobile, only able to barely out speed a crawling prey. As a result they usually wait patiently for disabled or dying prey, but can also target camps made by those not knowing of the presence. They rely on other dangers and distractions to creep on their prey and eat them alive.

The Ozzarbor can be mistaken for a normal tree if seen from the wrong angle, a DC 20 Spot check will notice something wrong with the tree. If seen from the right angle no check is necessary unless terminally stupid. A cunning Orzzarbor will attempt to smooth it features and close it eyes, making a Disguise check to appears as a normal tree, but few rarely bother.

An Ozzarbor is slow and will typically wait before initiating a fight, in group they will attempt to cut off potential escape for their preys. A lone Orzzarbor in a forest will stalk it prey for as long as needed. Since they are very difficult to kill they are not afraid of death, however they loath fire and holy weapons and will avoid those bearing them.

Devastating Bite (Ex): A Ozzarbor's bite has a 18-20 critical threat modifier and cause any creature struck a by a confirmed critical to make a DC 22 Fortitude save or be Staggered for 1 minute, the creature may attempt a new save at the end of each of it turn to end the effect. The DC is Strength-based.

Devour Soul (Ex): As a standard action touch attack, the maita can consume the soul of a creature which has perished within 1 minute, storing it within themselves. They automatically do this as a free action with no touch attack if they are the one who slew the creature. A devoured soul remains with the maita's body and the creature cannot be revived by anything short of true resurrection, miracle, wish, or a limited wish to release the soul followed by any valid revival attempt. Alternatively the death of the maita releases all consumed souls. It takes a year and a day for the maita to digest a soul.

Fear of Flames (Ex): All Ozzarbors are At Bay from any fire larger than a camp fire, creatures carrying a torch or a clearly flame-based weapon.

Munch (Ex): When a Ozzarbor successfully grapple a creature with it bite's Improved Grab ability it place the creature in it mouth and chew on it. At the start of each of it turn, it deal 1d6 + 10 damage (piercing, slashing and bludgeoning) with a DC 22 Reflex save allowed to halves the damage. Since it a constrained space evasion typically do not apply. As a full-round action a creature may also escape it (and the grapple) with a Reflex save with the same DC, leaving them adjacent to the tree. The DC is Strength-based.

If a creature dies as a result of the bite damage or the munch damage, the Ozzarbor immediately chew and swallow it, making the corpse unsuitable for a raise dead spell.

Regeneration (Ex): An Ozzarbor has Regeneration 5 bypassed by good-aligned weapon and fire.

Rooted Movement (Ex): An Ozzarbor move through it partly burrowed roots and thus can move unhampered through difficult terrain and ignore hazards such as caltrops.