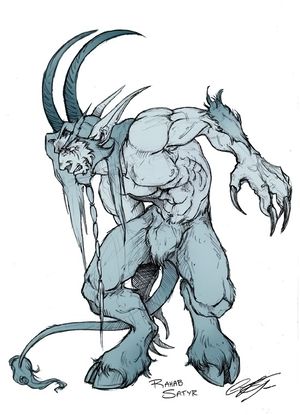 A lower level satyr then SRD

If you hear music playing in the distance, it's likely coming from a satyr. These goat-human beings are famous throughout the world for their music, and infamous for their mischievous and sometimes cruel pranks. While they are welcome in the cities, many live in the glades of the forests, happily playing their music. Satyrs have a love of wine, fine food, art, and music. However, despite these seemingly regal tastes, they are notorious pranksters, putting just as much effort into their pranks as their more practical pursuits. They are generally greedy, and are known to swindle and cheat their way into wealth. Satyrs are generally not very inquisitive – they tend to stick to what they know, and the other races may see them as snobby because of this. While this isn't necessarily true, if a satyr knows something you don't, you will likely hear more about it than you ever wanted to.

Satyr's stand proudly and firmly on cloven feet with a stubby protruding tail. They have a rough-looking exterior with long chestnut brown, or more commonly red, hair. Their horns can protrude anywhere from a few inches to around two feet long. Satyrs heights commonly range between 5'11 and 6'6. Adults are easily distinguishable from the smaller commonly mistaken faun. Their ears are considerably longer than even most elven ears and both their bottom and top canines are slightly pronounced. Their eyes differ from satyr to satyr but are usually quite striking.

Satyrs tend to get along well with humans who appreciate their boisterous demeanor and love of alcohol, and are usually more tolerant of their pranks. Elves share similar fine tastes but consider the over-indulgence common in Satyrs to be somewhat barbaric. Most Satyrs see dwarves as up-tight, and don't like being around them. They are hated by dryads since satyrs commonly capture these beautiful fey and force themselves upon them. Satyrs and centaurs often fight with each other, though the exact reasons are unclear and the bloodshed seems to go back several centuries.

Tending towards Chaotic Neutral; Most others are Chaotic Good and a few Chaotic Evil.

Satyr's live in forest dwellings, by ponds, brooks, and babbling streams. They often find large clearings deep in the forest when seeking seclusion. Some satyr's that lean more to the darker side feel more comfortable in the outer realms.

It is likely satyrs would worship Olidammara. Since satyrs tend towards the bard class they could also be followers of Fharlanghn or Corellon Larethian. An evil satyr most likely would worship Erythnul.

Satyr's often pick names for themselves, some more often then others. Some choose names that stick or are given to them.