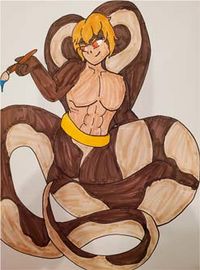 Scalethis are a reptilian species, Scales stretch over most their bodies, mostly leaving some spaces on the head (face), hands, and sometimes neck and chest. They also have hair, usually in darker colors but sometimes dye them to make them stand out more. Some Venes also have hoods that they stretch from their neck and back.

Scalethis skin colors are generally a pale or less saturated version of their scale colors. Scalethis scales vary between browns, reds, and oranges usually with lighter or darker patterns on them, though Venes castes can have far brighter colors and more complex patterns. Scalethis eyes are slit pupiled and have larger irises than humans, covering most of their sclera, the iris colors are generally yellows, oranges, reds and greens

Scalethis most commonly only bother with clothing that is very practical, belts and sashes to hold personal items in pockets or bags. Every adolescent or older female Scalethis will have a knife in a sheath at her side.

Scalethis tend to live in interconnected settlements in cave systems which may or may not house multiple ‘tribes’ of lamia. Typically one tribe will consist of several settlements with some shared areas and well traveled paths between them and will share resources between the settlements of the same tribe. Depending on how big a tribe is, it may function as a semi-nomadic entity moving seasonally to forage in different parts of a mostly empty cave system, or any system up to a kingdom, where smaller areas may pay tribute to a central tribe in exchange for guaranteed food and protection from outsiders, with a ruling group or family. Scalethis tend to have a few ‘castes’ which differ from each other in a few physical features and define the kind of social position a certain individual may be more inclined towards. They are usually not viewed as strict lines but are a tradition still kept up due to their history and mythos, but exactly how much difference there is between the castes tends to depend on the tribe (and how big/traditional it is, with bigger tribes tending to have more solid caste divides).

Though traditionally there is something of a hierarchy of the castes, Scalethis culture focuses on respect for those around you and those who work for you, especially since all three castes commonly work together to reach the same goal. Due to this, the castes tend to be less strictly a hierarchy of rulership and more often a way of talking about certain industries or jobs that the body types are suited to, and in smaller tribes there is almost no division between them at all. Historically in some tribes where the divisions were firm there were laws against the castes interbreeding, but these laws have all but disappeared many years ago from the modern age and the castes intermingle regularly, creating a large array of body types, but the traditional thoughts of personalities and strengths still live on as stereotypes that some tribes lean into more than others. Scalethis leadership tends to be a matriarchy instead of a patriarchy, due to the patron goddess of the Scalethis being Sevathia The Mother. The sanctity of the mother is held in strong regard, meaning that royal leadership should rest in a Queen that will be a mother to her people, and small tribes trust their female matrons to look after the tribe as her own family. As well, the females are to be the leader of their families, making sure they stay safe, are cared for, and female bodily autonomy is held in high regard. Courtship is based on female choice, and as such male Scalethis usually focus on grooming and being helpful to females they want to flatter, sometimes to the point of being subservient. Tastes vary wildly between tribes, but generally male Scalethis show off their abilities to take care of a family and home affairs by being very hygienic, keeping themselves clean and growing their hair long to prove they can take care of it, gathering resources for their tribes and mentoring children, and may create or work to obtain impressive items or feats to impress those they want to court, depending on their interests. If the female likes the gifts and attitudes of the male enough (or, you know, find them hot enough) they will generally be the one to initiate the relationship, though not always.

Scalethis tend to live in interconnected settlements in cave systems which may or may not house multiple ‘tribes’ of lamia. Typically one tribe will consist of several settlements with some shared areas and well traveled paths between them and will share resources between the settlements of the same tribe. Depending on how big a tribe is, it may function as a semi-nomadic entity moving seasonally to forage in different parts of a mostly empty cave system, or any system up to a kingdom, where smaller areas may pay tribute to a central tribe in exchange for guaranteed food and protection from outsiders, with a ruling group or family.

Scalethis reached what was pretty much their height of territory expansion in the Age of Adventurers, where they inhabited most of the large cave systems in different areas of the world, and even explored the surface world to gather food sometimes, usually on warm spring and summer nights where the conditions of the terranean world were the most similar to their subterranean home. A few individuals with the most wanderlust would even investigate the surface world farther, from time to time becoming adventurers and learning about the surface species.

Mother Scalethis often name their children to carry on family legacies. Sometimes adult Scalethis will change their own names to something they preffer.

Creature Type. Humanoid
Ability Score Increase. Constitution +2
Age. Scalethis reach adulthood at the age of 25, they generally live to be around 175 years old. Scalethis below the age of 10 generally appear to be common snakes that posess humanoid arms.
Alignment. Scalethis tend towards lawful alignments focused on community and family in particular.
Size. Standing relaxed Scalethis average between 5 and 6 feet tall. Their tails add an additonall 5 to 6 feet of length. When interacting with non-Scalethis, their tails are often kept coiled closely to their body out of politeness which makes them appear smalller. Your size is Medium.
Speed. Your base speed is 30 feet.
Darkvision: Scalethis can see in infrared with the pit centers under their chins You can see in dim light within 60 feet of you as if it were bright light, and in darkness as if it were dim light. You can't discern color in darkness, only shades of gray.
Poison Resilience. You have advantage on saving throws you make to avoid or end the poisoned condition on yourself. You also have resistance to poison damage.
Bite. Scalethis have a natural bite attack which is a natural meelee weapon attack with +Str to hit. On hit deals 1d4+Str Piercing damage
Languages. You can speak, read, and write Common, Undercommon and Dwarvish

The Mighty Ones, Boan are physically large and strong, with excellent stamina. The Boan caste is usually made up of sturdy warriors, laborers, and protectors. While somewhat identified as the lowest caste that does most of the gruntwork, they are respected for their physical prowess and ability to face tasks that would be dangerous for the other castes. Many are strong enough that they can kill large animals or crush small rocks with their tails alone, and their skin tends to be a bit thicker (physically, not necessarily emotionally) than those of the other castes. They are seen as being honorable, protective, and with good memories that they use to share oral histories even in the farthest settlements. Even if they are not always as strategic as the Venes or as clever as the Colbade they’re good problem solvers, good at using a careful application of force to solve things quickly and easily that it would take several individuals of the other castes to accomplish. ' is a subrace of 'Error Race Missing

Ability Score Increase: Strength +1
Constrict. Boan Scalethis have advantage on Strength based grapple checks. In addition, they can make an attack on a grappled opponent to constrict them. This prompts a DC 10+Str Constitution saving throw against suffocation.

The Shining Ones, the Colbade caste is the home of many of the merchants and craftsmen. Mostly without venom and not having the strong bodies of the Boan, Colbade rely on their skills and intuition to create and make a living. Many of them specialize in certain tasks like metalworking, the creation of textiles, jewelry craft, pottery, and other technologies with skills that they pass down in their families. They create the weapons for armies, the clothes for royalty, and the writings that they use to teach their young. They are known to be clever and wise, good teachers and dextrous artists. They are generally considered the ones who come up with the formulae and technologies that help improve life for their tribe, as well as the traders that work as diplomats to other tribes.

' is a subrace of 'Error Race Missing

Ability Score Increase: Intelligence +1
Clever Cobade. As a member of the crafting caste you are granted one skill proficiency of your choice.

The Dangerous Ones, Venes Scalethis tend towards more viper-like, with bodies that produce potent venom that they can inject through sharp fangs in their mouths. Their patterns tend to be brighter and more colorful with intricate patterns, but physically they tend to be slighter and more lithe, with their greatest asset being their minds. They are known to be intelligent, creative, strategic and charismatic, traditionally meant to be the leaders of armies, kingdoms, and workforces, organizing and creating rules for others to live by. In large kingdom-like tribes the royalty are typically Venes, with different Venes families sometimes acting as nobles and vying for positions. Some individuals of other castes can also produce venom, but it’s usually much harder for them to use without the fangs that Venes almost always have.

' is a subrace of 'Error Race Missing