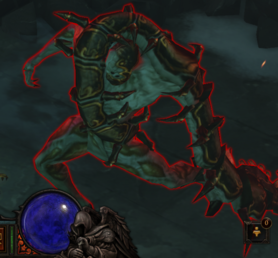 A scoropendra with both centipede metastases manifest.

Hailing from jungles in faraway realms, infested with dangerous parasytic lifeforms, scoropendra are the descendants of members of a race of humanoid planeswalkers that were corrupted by local fauna and left to perish for themselves. While the highly toxic environment and the quickly spreading poison proved fatal for most of these unfortunate victims, some survived and endured to become the creatures known and feared as Scoropendra.

Little of the scoropendra still looks like the original species they were created from, as the heavy mutation has corroded them inside and out, containing their living bodies within endoskeletons bred for high-speed battle. As the planet they originate from is a seeding world used by advanced alien species to create terrible bioweapons through guided evolution, the formation of something as lethal as the scoropendra is no surprise. While scoropendra maintain a sense of self and their mental faculties are generally heightened by the change, little of their human personalities remains, and the creature that results is overcome with an incredibly powerful instinct to slaughter those around him. As such, those that seek to use them as war asset tend to drop them pod and all into warzones from orbit to cut bloody swathes through any ground troops unfortunate enough to cross their path.

Physically, scoropendra are completely covered in hard, rough scales of a burnished bronze colour, their heads armored with a prolonged beak and a single, central black eye with two adjoining red irides and pupils, allowing them to attain a form of advanced depth perception by quickly vibrating their eye side to side. They maintain humanoid feet, though their mutation has rendered their legs partially digitigrade, and from their sacrum extends a tail roughly akin to a scorpion's ending in twin stingers. Scoropendra have the ability to form metastases; altering parts of their body in order to improve their battle prowess. Their most particular metastasis is to transform their arms into massive, centipedes whose jagged limbs and beaks are coated in highly corrosive enzymes.

A scolopendra stands roughly 7 and a half feet tall and weighs approximately 500 pounds.

Scoropendra fight by fearlessly throwing themselves at their foes. Due to their extremely hard exoskeleton, their unarmed strikes and natural weapons are treated as adamantine for the purpose of overcoming damage reduction.

Bio-Energy (Ex): A scoropendra, as a xenotheric creature, can use its own biological energy to alter its body and perform special abilities and attacks. A scoropendra's bio-energy pool can hold a maximum of 15 charges.

The scoropendra can switch its centipede metastases to 'attack' or 'guard' mode at will, but only at the very start of its turn. A centipede metastasis that starts its turn grappling a creature cannot be made to guard.

Improved Grab: To use this ability, a scolopendra must hit with a centipede metastasis attack. It can then attempt to start a grapple as a free action without provoking an attack of opportunity.

Metabolize (Ex): When its bio-energy is low, a scoropendra can force its own metabolism into overdrive to regain bio-energy charges in the heat of battle. By expending a standard action, it immediately regains 1d4+1 charges, but incurs 2 points of bio-energy drain from the strain of doing so.

Metastases (Ex): An expression of their highly versatile genetic makeup, scoropendra can alter parts of their bodies at will, creating limbs, channeling their power, and empowering them in ways necessary to survive danger.

Exoskeletal Metastasis: By exciting its exoskeletal plates, the scoropendra can cover itself in dangerous spines that will wound any creature touching it in combat. A scoropendra's manifested exoskeletal spines are incredibly jagged and sharp, creating nasty lacerations. All unarmed and natural weapon damage becomes both piercing and slashing. Furthermore, creatures hit by the scoropendra's melee attack, objects touched, as well as creatures or objects that hit or touch the scoropendra in battle take an additional +2d6 points of damage and 1 point of bleedout. Usage of exoskeletal metastasis costs 1 bio-energy charge per round as long as it is sustained. Activating the exoskeletal metastasis requires a swift action, but maintaining it does not require any actions.

Poison (Ex): Injury from stinger, Fortitude DC 24, initial effect causes the target to immediately become numbed, and the secondary effect is death. The save DC is Constitution based.