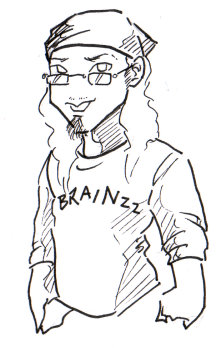 I am a new DnD player, and has played in only three campaigns - two in 4th Edition, and one in 3.5 Edition. One 4th edition game and the 3.5 edition game were run by a particular Foxwarrior. In the future, I plan on running my own 4th edition game... sometime. Ideas are piling up, partly because the 4th edition system strikes me as particularly flexible/fudge-able - something I like, as I'm used to FFRPGs, etc.

Note that this puts me with a relative lack of experience with actually playing DnD, as opposed to people who've played... more than three games? I do try my best to help out where-ever I can, but how rules would work in a game tends to be a little beyond me. I wind up asking for advice a lot.

I've made the Sniper, because I was interested in how that might work. It's really not rogue level, I don't think. I've also made the Electric Mage class, because one of the other players in Foxwarrior's campaign wanted it. (Specifically Jewbear.) I've also helped Foxwarrior with his Wordcasting rules page. Also built the Word Warrior class that uses those rules.

Lately, on a whim, I've made the Durumgir race, and have been continuing to edit and improve that race, along with creating things associated with it.

I have a strong predilection towards things containing internal logic, and enjoy the non-combat, non-skill-based parts of DnD most of all. Which is odd, because I'm making things with rules here, and these things aren't those things.

I also have a fairly decent sense of capitalization, spelling, and other things. I can't resist making entries more readable, sometimes. Fallout of me being a creative writer as a younger person.

Enough for now. Check out my classes, see if you like them. If you'd be willing to lend a hand, please help.

http://www.dnd-wiki.org/wiki/User:Aelaris/sandbox (Currently has a list of related feats, and some stuff that has to do with some 4e homebrew.)

http://www.dnd-wiki.org/wiki/User:Aelaris/sandbox2 (Currently a build of a ribbon-knife using Word Warrior.)