From Dungeons and Dragons Wiki
< User:MisterSinister
Jump to: navigation, search 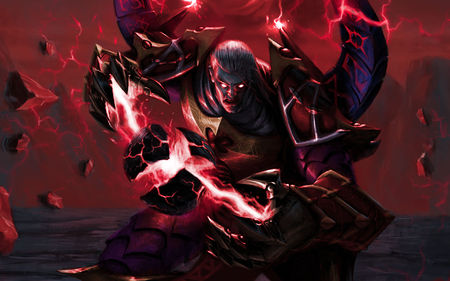 Asher, in all his glory.

Asher was born in a small, sleepy village. Being both an albino and a tiefling, he was abandoned in the woods near his village as an infant. He would have died, but instead he was found and raised by a rather unpleasant retired adventurer. Asher (although he wouldn't use that name until later) was taught that he needed to hide everything he is from others if he is to be accepted. The retired adventurer was never a very pleasant individual, and Asher basically hated him as much as the world that abandoned him, but at the same time, the adventurer did become his mentor, teaching Asher what he knew. Asher learned well, and to hide his appearance from the world he felt had rejected him, also learned to wear a mask, cloak and gloves all the time. His mentor also warned him that he had to kill anyone who saw his face. Asher's demonic nature also began to come through at this point, which led to outbursts of uncontrolled emotion, which led Asher's mentor to beat him. This taught Asher to channel that rage elsewhere.

When Asher grew up, his mentor told him that he needed to destroy the village that cast him out, so that none would know of his origins. Asher did this, burning it to the ground and killing everyone there, and during this time, discovered his sorcerous powers. Due to the circumstances, Asher believed that only by hiding his face would his powers continue, and that anyone seeing his face had to be killed. As part of this, he made himself a mask out of a skull, and took on the name 'Skull'. However, he knew that one being remained that had seen his face - his mentor. When he returned to kill him, however, he found that he couldn't. Instead, Asher blinded him, and left to make his own fortunes.

He spent a while wandering the world with a group of adventurers. They were Godfrey (a highly-unpleasant human duellist, assassin and thief), Blaize (a powerful mind-controller) and Vel (his mind-controlled slave). They ended up working for an individual named Sulkahn, who as it turned out, was a powerful shapechanger. They had to mostly do things like cover up crimes, murder people and so on - nothing very nice or pleasant. 'Skull' had basically used the fact that he had to kill anyone who saw his face to do some pretty indiscriminate killing, and his emotional deadness first became apparent here (as he hadn't been around other people much before).

However, a short-lived encounter with one of Sulkahn's associates (another adventurer) showed him that he didn't need to hide his face to use his sorcerous powers. This changed Asher's life, and he shattered his mask, choosing the name Asher, which seemed appropriate at the time for a reason he wasn't sure of. Not long after that, Sulkahn, and the entire city that he lived and worked in was washed away by a flood, with Asher being one of the few survivors. Having ended up far away from anywhere that he thought of as home or familiar ground, he had to spend many days in isolation.

On the island that he washed up on, he ran into a remarkable individual, which wanted Asher dead. This man, by the name of Trikon, claimed that Asher was a reincarnation of one of the Ebon Phoenix Masters, and that they had this in common. Trikon claimed that he had already killed his previous incarnation, and now had to do so again to his current one. Asher defeated Trikon, and taking Trikon prisoner, he forced him to reveal as many of the secrets of the Ebon Phoenix Masters as he could manage.

What he found out was nothing short of astounding. As it turned out, he hadn't chosen the name Asher by accident - it was the name of one of the Ebon Phoenix Masters from the past. There were thirteen of them at any one time, as when one died, another would be born from their soul. They wielded black fire, powerful martial arts, and had incredible knowledge, for each of them, when awakened, remembered flashes from their past lives - something which Asher discovered he could now do. While he didn't have much control over these flashes, they all seemed to be leading him towards a specific place on this island - although he could never quite understand what. Trikon was dragged along, bound and injured, as for some reason, Asher felt he should be spared, for now at least.

As Asher wandered the island, he began to have strange dreams and visitations, of a nature he was quite unfamiliar with. These were otherworldly visions, full of pain, death, and darkness, none of which made any sense, but the more he wandered, the stronger they became. His past lives, emerging from him directly, blackening his eyes and speaking with his voice, told him to keep going and to seek something, but he didn't know what. After many days, he eventually found himself in front of a truly strange stone building, unlike any he had ever seen before. Something about it wasn't quite right, as if it had been built using impossible geometry or didn't quite fit into the three dimensions. His dreams and visions had become so intense by this point that he wasn't very certain that what he was seeing was even real - but he knew he had to go inside and unlock its secrets. Bringing Trikon with him, Asher searched the compound.

Inside, he found strange writings on the walls, which were in no language he could understand, but at the same time, were as clear to him as anything he had ever seen before. They spoke of the Neverborn - a dead deity with great power. The writings were confusing and contradictory, and Asher spent many days reading them, and just as many trying to make sense of them. The visions hindered as much as they helped, but after two weeks, he found himself in the central chamber, in front of a large sphere, shattered into three parts.

Upon touching the sphere, it came to life, infused with his demon magic and the power of the Ebon Phoenix Masters. At once, he received the clearest vision ever - the Neverborn had spoken to him. He was their Champion, their own, and would serve them. In return, his powers would grow ever greater - as they would give him the means to become the one, and only, Ebon Phoenix Lord.

With the help of the orb of the Neverborn, Asher drained and consumed the soul of the long-suffering Trikon, taking into himself all of his previous incarnations, as well as his knowledge and power. With this, he began to seek out other Ebon Phoenix Masters, in the hope of eventually consuming the other eleven. The Neverborn occasionally send him clues, in the form of dreams or visions, but Asher still doesn't know why they chose him. To help understand, he has been searching for more information about the Neverborn and their goals, but hasn't found much to go on. He does, however, believe that the Neverborn created the Ebon Phoenix Masters - for a reason he cannot quite understand.

Asher has albinism, which makes him pale and white-haired. His demonic heritage has also given him prominently-pointed canines, and eyes which are redder than an albino's already are. While he is strong and muscular, he's also fairly lean, and tends to wear bulky armour to look more impressive. Electricity occasionally arcs on or around him, and the devoured soul of Trikon gives him an otherworldly aura, which most people find deeply unnerving (as if he wasn't scary enough already).

Asher's most common expression is one of dark neutrality, as if he was thinking about something truly ghastly (and probably is).

Asher is highly arrogant, incredibly touchy, morbid to the point of being scary, emotionally fairly muted, and basically is the standard image of the 'honourable villain'. However, he doesn't mind getting his hands dirty at all, and can actually be very mad when provoked in the right way. He is single-minded in his desire to find the other eleven Ebon Phoenix Masters, but he hasn't had much success yet, so he's doing other work in the meantime to try and discover more. He's also keeping an eye out for anything related to the Neverborn, however scant or unlikely, to help understand his position. He has no problems with violence, torture or in fact almost anything nasty, but he despises cowards and weaklings. He also rarely says more than a few words, unless one of his past personalities kick in.

Asher's albinism makes it uncomfortable for him to be out in the sun for much of the time, which makes him nocturnal by preference. A mixture of the screaming of the soul of Trikon, the Neverborn's occasional bizarre dreams and his frequent past-life flashes mean that he hardly sleeps anyway. This, combined with his slender and pallid physique has made some people mistake him for a vampire in the past - something which he now plays up by drinking blood. He doesn't really need to do it, and doesn't enjoy the taste very much, but it's part of the image that he uses to intimidate those around him.

Asher has two long-term goals: one, to find, defeat and consume the remaining Ebon Phoenix Masters; and two, to find out more about the Neverborn, why they chose him and what their plans for him are. By way of this, Asher seeks out ancient civilizations, strange or heretical works, or anything whatsoever that gives him more information or power to work towards those goals.