Abominations have been present throughout history, some making themselves well known such as the Frankenstein monster, whilst many have tried to emulate their hideous appearance. It takes a truly twisted and deformed mind to create such a being, though it takes much more vision to become one as opposed to giving life to one. In the beginning stages of one's progression to become a true abomination against nature, the creature must first find their true inner hunger, the primal urge to feed until they cannot feed any longer, to sate their desire upon any being, living or deceased, moving or not. 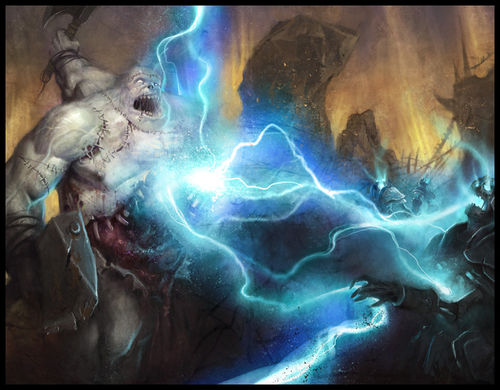 In their development, the creature will usually drape themselves in the skins and flesh of their defeated opponents once they have devoured and butchered all compatible parts of their prey, stitching twitching limbs onto their own body, replacing old, disused organs with those more superior, arms, legs, everything except the mind, which retains their never-ending hunger to improve themselves, to find faster and more efficient ways to feed. In the later stages, the changes are truly horrifying, disease and poisonous liquids ripple under bloated, discolored skin, reeking of the most foul scent to ever be excreted by any member of that race, to smell like the dead walking - only worse. The tragic ending of an abomination is usually due to multiple organ failure, coated with so much meat they simply cannot find the means to strip themselves of it and reach the necrotised layers below, often black and festering. However they can survive through staggering amounts of punishment, disease and poisons rarely affecting them directly, having to work through layers of already diseased flesh in order to reach the most vulnerable inner organs, using less harmful bacteria to combat further infection in a perverted sense of the word 'symbiotic'. The secret to success as an Abomination is to find a system to constant removal of carrion in direct contact with the vital organs

Most abominations are truly insane, butchering, feeding, and roaming as they search for another means to sate their hunger, no thought apart from that of their next mouthful of the living. However, there are those who retain a twisted sense of reality, able to understand and even control their appetite in order to harness the true potential of the abomination, hiding under a mask of unnatural youth they instead do not add and remove bits and pieces of their former bodies, instead replenishing large parts of their personage and making the seams between foreign flesh and their own disappear, as if they were originally one piece, body snatchers in their most deadly form, completely conscious of their actions.

Characters pursue the abomination prestige class to become a monster that can disable opponents in combat. Most characters will enter this class from the barbarian class, but fighters, rangers, and rogues are not uncommon.

All of the following are class features of the abomination.

Cannibalize (Ex): At 1st level, an abomination has the ability to consume fresh corpses and repair their own deformed bodies with surgical supplementation. The abomination can spend a standard action to devour a body that has been dead for no longer than one day. After consuming part of the corpse, he heals 2 Hit Points per racial Hit Die of the deceased creature (2 hitpoints if the creature has no racial HD). If the amount healed would raise him above his maximum hitpoints, he gains he remainder as temporary hitpoints, to a maximum of twice his abomination class level. A corpse can only be cannibalized once and only consumes part of the corpse.

Must Feed! (Ex): At 1st level, the abomination gains an incredible hunger for living flesh. To feed his hunger he bites off pieces of his prey and revels in the prey's pain and suffering. The abomination gains a bite attack if he does not already have one, that deals 1d6 damage + his Strength modifier (for medium abominations). See Table: Weapon Damage by Size for larger or smaller abominations.

Unsightly (Ex): An abomination did not simply get named as such as some sort of joke, they are physically repulsive and continue to degrade drastically as they continue down the path of self-mutilation. Starting at 1st level, the abomination takes a -2 penalty on all charisma-based checks (except Use Magic Device and Intimidate) and gains a +2 bonus to Intimidate checks against living creatures for every Mutilation he gains.

Flesh Barrier (Ex): By draping his body in the carrion of his fallen enemies, the abomination lumbers around coated in a layer of the dead which may shield him from the full impact of physical harm. Starting at 1st level the abomination gains a +1 bonus to armor class. This bonus increases every three levels thereafter (+2 at 4th, +3 at 7th, +4 at 10th).

Mutilation: At 1st level and every other level thereafter, the abomination chooses one of the following mutilations to add to his body:

Gaping Maw (Ex): The abomination's mouth opens wide and unhinging his jaw, he latches onto his prey and consumes it whole. The abomination may now devour a creature equal to his own size category when he decides to use the Swallow Whole ability. His stomach capacity doubles (which allows one creature of his own size category). The acid damage dealt to creatures inside his stomach is also increased to 1d8 per abomination class level. This mutilation may only be selected once the abomination gains the Swallow Whole feature.

Shed Flesh (Ex): Once per day, an abomination may peel off the diseased excess layers of skin, rotting flesh, and cadaver in an explosive manner, coating the surrounding area in fetid waste and at the same time relieving him of unwanted weight, disease and infection. As a standard action, the abomination can shed excess flesh in order to remove any current temporary ability score loss and energy drains such as ability drain, ability burn, and negative levels. If he activates this ability during a grapple, he may immediately make a grapple check with a bonus equal to his abomination class level to escape the grapple. Any creatures within 10 feet or an abomination using this ability must make a Fortitude saving throw (DC 10 + 1/2 HD + Abomination's Constitution modifier) or become shaken for one round.

Gruesome Appendage (Ex): The abomination, through a rather grotesque and barbaric process, removed an arm extension from a living creature and sewed the appendage onto his own body. The abomination gains a fully functional extra arm. It can be placed wherever the abomination decides to place it (this has no mechanical game effect). This mutilation can be taken a second time starting at 5th level.

Fortification (Ex): As the layers of flesh and cadaver builds up upon the abomination's own body, it becomes increasingly hard to strike at the vital areas, covered by multiple layers of varying origin. At 2nd level, the abomination gains a 25% chance to avoid the extra damage granted by an attacker's sneak attack or critical hit like the light fortification armor ability. This chance increases to 50% at 5th level, 75% at 8th level, and 100% at 10th level.

Master of the Flesh (Ex): At 2nd level, the abomination allows the diseases and toxins that are present in the flesh he wears to battle against foreign infections. He gains immunity to disease and poison of both a mundane and magical nature.

So Hungry... (Ex): At 4th level an abomination can attempt to completely consume the creature he is biting, forcing it down his gullet and digesting it whilst it still lives. He may now Swallow Whole his opponents. After being swallowed, the creature is dealt his bite damage plus an additional 2d8 acid damage from his corrosive stomach acid. To escape his stomach, the creature must use a light piercing or slashing weapon to deal (Abomination's class level + 2 x Constitution modifier) damage to his throat or stomach lining, which has an AC equal to 10 + the abomination's Constitution modifier + 1/2 the abomination's natural armor bonus. His stomach has room for one creature that is one size category smaller than him, two creatures that are two size categories smaller, four creatures that are three size categories smaller, etc. Any creature that is killed inside his stomach immediately counts as being Cannibalized.

Massive Bulk (Ex): At 8th level, the abomination can use its mountainous bulk to absorb attacks. Against any spell or ability that requires a Reflex saving throw, he can make a Fortitude saving throw instead.

Living Dead (Ex): At 10th level, the abomination has become a monstrous fusion of undeath and organic flesh. He is treated as Undead for spells and effects, with a turn resistance of half his abomination class level. He gains the following traits:

Combat: Abominations can be used to lock down and disable enemies. They have several options including their reprehensible stench, swallow whole, and meat hook to disable enemies.

Advancement: Abominations do best with melee-based prestige classes such as Frenzied BerserkerCW.

Resources: Abominations have no friendly organizations. Sometimes they have the support of a master, but that is the most help they will ever get.

Abominations have no proper place in the world that they could ever call home. It is hard to justify accepting a creature that will eat members of any intelligent race including its own. Some people will be able to direct an abomination's hunger toward a particular goal. When that goal is complete though, it usually becomes wise for those people to keep their distance from the creature. Some abominations are able to find groups of murderous creatures that will accept them, but few stay for very long.

NPC Reactions: Most NPCs will run away. Abominations like to eat people, so this course of action is pretty logical. Some NPCs take it upon themselves to hunt down abominations; most end up becoming dessert.

Characters with ranks in knowledge (religion) can research abominations to learn more about them. When a character makes a skill check, read or paraphrase the following, including information from lower DCs.

Abominations in the Game[edit]

Abominations can be the type of creature that rampages across the countryside leaving devoured bodies in its wake. They also can be a secretive serial killer in a big city. Sometimes they are just the pet of some greater evil lord.

Adaptation: An abomination can be a lurking evil within any peaceful society. They might be a minion of an evil leader as well.

Sample Encounter: Pudge, a human Abomination was thrown out of his barbarian tribe for his cannibalistic tenancies. He now is on his way home to turn his tribe into a new layer of flesh for his body and a large meal.