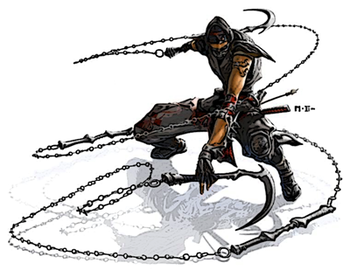 Chthonic Serpent is the martial discipline of whips and chains.

The school of the Sublime Way focuses on versatility and efficiency. Their students are taught to use many weapons, and to excel in the weapons most suited to their disciplines. Reshar believed strongly that a weapon must be usable in all situations and that a martial adept must use any weapon available.

As such, the 'soft' weapons were largely scorned by Reshar. Though masters of Setting Sun could put nunchaku to powerful use, and the spiked chain was a thing to be feared in the most skilled of Shadow Hand adepts, Reshar himself found that the weapons, though potent in the hands of a master, simply did not offer enough to warrant the special training necessary in their use. If warriors were to be efficient, choosing how to spend their time training is crucial — and time spent mastering such a complicated weapon was wasted, thought Reshar, for his vision of a martial adept was one who would not be dependent on any single weapon.

Alikarin ahn Tollerria, a friendly rival of Reshar's, disagreed with this decision. He felt, strongly, that the weapons offered opportunities that could not be found within rigid weaponry, and that training specially in their use could offer rewards to a dedicated student.

In many ways, Alikarin did find that Reshar was correct — he spent many decades simply experimenting with the weapons, and never had the success of his friend. He drew few students, because he felt he himself was still a novice. Nevertheless, he persevered, and after many years, his small dojo, though obscure and remote, had succeeded, through the combined efforts of Alikarin and his students, in developing ways of using soft weapons not only with the techniques of the Sublime Way, but also with their own discipline: the Chthonic Serpent.

Learning Maneuvers from the Discipline[edit]

Because Alikarin had only succeeded in developing a successful discipline for these weapons by the time both he and Reshar were quite old, Reshar never mastered the discipline and it was never included in his school. As such, it never gained nearly the fame as Reshar's nine, but Alikarin's little dojo lives on, and masters of Chthonic Serpent may be found on occasion. Only Swordsages and Warblades may learn maneuvers from Chthonic Discipline, but most cannot. There are two ways to learn maneuvers from the discipline.

The first is to have received prior training in the discipline. A Warblade or Swordsage may start with access to Chthonic Serpent, but doing so means neglecting their training in another discipline. A Swordsage or Warblade may during character creation select one of the disciplines he has access to, and replace it with Chthonic Serpent. That discipline's associated skill is no longer a class skill for the character, and they gain Use Rope as a class skill instead.

Game Mechanics of the Chthonic Serpent

Maneuvers of the Chthonic Serpent Discipline[edit]

To see the full, expanded description of every maneuver, click here.

Chthonic Grip [General] Prerequisites: Blade Meditation (Chthonic Serpent), Any two of Binding Constrictor, Boa Strike, Choking Python, or Anaconda CrushBenefit: You may initiate a Grapple with any of the weapons associated with the Chthonic Serpent discipline. Doing so requires a successful melee attack (not touch attack), followed by a successful Grapple check, but does not provoke an attack of opportunity and does not require that you move into your enemy's space. Grappling in this fashion is identical to using the Binding Constrictor maneuver.

When using Binding Constrictor, Boa Strike, Choking Python, or Anaconda Crush, these maneuvers deal an extra +2d6 constricting damage. Special: Chthonic Grip can be used in place of Improved Grapple to qualify for a feat, prestige class, or other special ability. If you already have Improved Grapple when you select Chthonic Grip, you can choose to lose the Improved Grapple feat and gain a new feat in its place. You must meet the prerequisite for the new feat.

Snake Dance [General] Prerequisites: Bardic Dance class feature, One Chthonic Serpent stanceBenefit: Choose a Bardic Dance you know, and a Chthonic Serpent Stance you know. You gain the benefits of that Stance whenever you use that Dance, even if you are already in another Stance because of the Martial Dance class feature. Special: You may take this feat multiple times. Its effects do not stack; instead, choose a different Dance with which to associate any Chthonic Serpent stance. No Dance may have more than one Stance associated with it.

Summon Suffering [General] Prerequisites: Able to cast 3rd level arcane spells, one Chthonic Serpent maneuver of 3rd level or higherBenefit: As a Swift Action, expend an Arcane spell slot in order to gain the Kyton's Dancing Chains ability for a number of rounds equal to the spell's level. Each chain animated with this ability is entitled to a single attack per round, and any one may be used as the your weapon for your attacks, though it can only be used to attack a target within 15' reach of you.

A Chthonic Serpent belt looks like a rattlesnake, and the buckle is an intricate device in which the head of the snake opens, revealing two fangs which can be slid over the beads in the serpent's tail. With the buckle closed, the belt looks much like an ouroboros (a snake eating its own tail). The belt functions as a crown of the White RavenToB, except that it grants maneuvers from the Chthonic Serpent discipline.