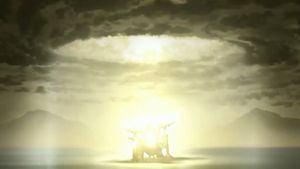 The very skies split asunder as down from on high descends the most radiant of lights, bathing everything in its compassionate warmth, and erasing every enemy of the faith in a blaze of retribution.

A massive column of divine light descends upon your position to judge everyone and everything you consider to be an enemy, leaving everything else within the area of the spell completely unaffected by your divine decree. Every designated enemy within 60 feet is dealt 2d6 damage per caster level, allowing a Will save for half damage. Designated undead and evil outsiders must instead make a Will save or be destroyed outright and banished to their home plane respectively, taking 1d6 damage per caster level on a successful save. Any designated creature with a challenge rating 10 less than your caster level or lower dies without a save.

In addition to the instantaneous effects listed above, the divine retribution also radiates bright light akin to daylight out in a 1-mile radius for 1 round per caster level, dispelling any 8th or lower level spells with the darkness descriptor currently in effect and preventing such spells from being cast while the light from the divine retribution remains in the area. While the light shines, the entire area is effectively doubly consecrated, bestowing the appropriate double bonuses and penalties to turning and undead. Any designated evil outsider, incorporeal undead or undead specifically vulnerable to light is literally burnt away by the divine light, taking 15d6 points of damage per round of exposure (Will half), as well as incurring any negative effects due to light listed in its creature listing. Unlike an ordinary daylight spell, the light from a divine retribution is considered the same as real daylight, and as such can utterly slay vampires and other creatures mortally baned by daylight making direct contact with the light. Furthermore, for the duration of the spell, any good-aligned allied creature within the area gains the benefits of the heroism spell.

All damage from a divine retribution is divine in nature and is not reduced by any kind of resistance or immunity to energy.

Divine retribution counters and cancels out dark reckoning. Neither spell is dispelled, but in the area where the two spells overlap, the effects of both spells are suppressed.