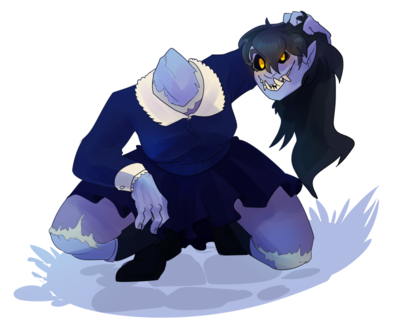 Dullahans are mostly humanoid in appearance, but very distinctly have a floating, disembodied head that is separate from their body.

Their skin ranges from blue to purple, somewhat dark and unsaturated. They are slightly taller than humans on average, with naturally broad, imposing frames. Even if a dullahan can have low muscle and body fat, they rarely look skinny due to the width and depth of their skeletal structure. Their otherwise human face is distinct for having an incredibly wide mouth that extends from one side of their head to the other. Dullahans can unhinge their jaw to open their gaping mouth to an impossible width.

Dullahans have numerous markings across their body made of thick, tough tissue. This tissue is part of a series of organs that are spread throughout the dullahan's body and head. These organs are a very important part of dullahan biology as they contain a single multi-dimensional space that perpetually links a dullahan's head to its torso and limbs. All air, nutrients, and brain signals travel through this space as a pathway, so even when a dullahan's arm or leg is severed, it can still move around. This unique biological phenomenon also happens to make the dullahan immune to nerve damage, an important quality for a creature to have, especially for those who may fall from a horse many times in their life. The special tissue is exposed to the surface as a dullahan exhales through this network, adding another unsightly quirk to their appearance. They do not appear to breathe, as dullahans constantly inhale and exhale at the same time.

Dullahans, like all fey, trace their history back to the Feywild. While many fey races formed civilizations, dullahans formed tribes and clans. Nomadic dullahans in groups of as little as ten or as large as a hundred individuals migrated through the realm at random. Each clan, completely detached from the others, developed their own rules and morals. Many kept to themselves, building an entirely self-reliant society that would neither accept or offer help. Others protected nature from danger, either out of a sense of duty or simply because they needed what the natural world could give them. However, a noticeable minority became roving bandits and raiders, ready to pillage and kill so they could steal what they needed. These dullahan clans gave their entire race an infamous reputation.

Some dullahan bandit groups conglomerated into larger roves of barbarians advancing in danger from nuisances to genuine threats towards Eladrin civilizations. Angered by their impudence, the entire race was punished through banishment from the Feywilds. In their mass relocation, the dullahan were separated from their clans, destroying their culture in the process.

In the present day, dullahans rarely form large clans and tribes as they did in the past. They instead live a nomadic life as incessant travelers. They migrate across the world, eventually finding another dullahan, courting them, and riding together for a few years before living separately once more. However, not all dullahans are condemned to this fate; some dullahan clans survived in exile, finding each other and reuniting on the other side. These clans have a strong sense of community, reinforced by the charismatic and trustworthy nature of their leaders. As before, the morality of these clans varies from place to place. The collective response to the dullahan race is quite different amongst the mortals of the Material Plane compared to those residing in the Feywild. Their lonely nature and intimidating appearance mean many humans treat them as otherworldly monsters.

The one major defining trait that all groups of dullahan share are the importance they place on a dullahan's steed. While they usually ride horses, each clan may have collections of any number of different steeds, especially those suited for their environment. Dullahan clans have ridden on the backs of camels, musk-ox, griffons, and at least one dullahan has been seen riding on a strange, two-wheeled vehicle that combines the arcane with the mechanical. Regardless of what they ride, each dullahan has their own steed from the day they come of age, and the life of their steed is more important than their own. No dullahan from any clan will break bread with a dullahan who lost their steed. Fortunately, the spell many dullahans know to bond with their steed extends the steed's natural lifespan to match their own.

Dullahan names largely sound like traditional Sylvan names to an outsider, but those fluent in Sylvan will recognize a name as being common or exclusive to dullahans only.
Male Names: Ultán, Raghnall, Tiernán, Eolann, Dagda
Female Names: Lasair, Doireann, Mairin, Eimhear, Siobhan

Creature Type. Humanoid
Ability Score Increase. Strength +1, Constitution +1
Age. Dullahans are relatively quick to mature but are long-lived. You reach adulthood at 20 but can live to be 400 years of age.
Alignment. Dullahans tend towards true neutral, but are relatively evenly spread.
Size. Your size is Medium.
Speed. Your base speed is 30 feet. See A Dullahan's Head
Fey. You have advantage on saving throws against being charmed, and magic can't put you to sleep. Your creature type is both fey and humanoid.
Mounted Lifestyle / Outcast. Choose one of the following traits that best describe your dullahan:
Mounted Lifestyle. Being raised in dullahan society, you are bonded to an animal you use as a steed. You know the Call Steed cantrip and start with a mount already bonded to you. You may choose from the list on the spell page, or your DM may allow you to use a different steed. You also have proficiency in the Animal Handling skill.
Outcast. For whatever reason, you don't have a mount. Perhaps it died, and you were never able to bond to a new one or you couldn't bond to one in the first place. You have an unusual perspective granted from your status as an outcast, and your fey powers have manifested differently. You know the Druidcraft cantrip and you are proficient in the Insight skill.
Languages. You can speak, read, and write Common, and a Dullahan dialect of Sylvan.. Your dialect can generally only be understood by those who speak Sylvan fluently, and you will come across as boorish.

Ability Score Increase. Your Constitution increases by 1, to a maximum of 20.

Detached Head. A dullahan's head is separate from their body. See A Dullahan's Head for details.

Tremorsense. Dullahans, who spend a lot of time with their head separated from their body, developed powerful spatial awareness so their headless body isn't helpless. Both your body and your head each have 10 feet of Tremorsense, your body is completely blind past this radius. Dullahans are not consciously aware of what is in this radius, mostly responding to their Tremorsense instinctively, and are incapable of detecting finer details such as writing on paper.

Ability Score Increase. Your Strength increases by 1, to a maximum of 20.

Headless. You do not have a head at all. It's gone, probably for good. But, you are still alive somehow, with your mind residing in your body instead of your head. Whatever is keeping you alive means you now do not need to eat, drink, or breathe. However, your lack of mouth renders you completely mute.

Replacement Head. You have a totem that you use as a replacement for your head; a helmet from a suit of armor, or a large smooth-cut crystal orb, or even a carved pumpkin. You are able to use your totem head as a focus for spellcasting, and it can be removed as normal and is filled with a perpetual ghostlike flame. If your totem is lost or destroyed, you can attune to a new one over the course of an hour. While using your totem as a spellcasting focus, you can cast spells without needing a vocal component.

Extra-Scary. You are proficient in the Intimidation skill.

(Optional) Undead. The reason why you are able to survive without your head is because you aren't alive to need it. You may optionally take this trait when making a cursed dullahan. Instead of your creature type being both fey and humanoid, it is undead and humanoid instead.

Your head is separate from your body. If you chose the True Dullahan subrace, the following is in effect: