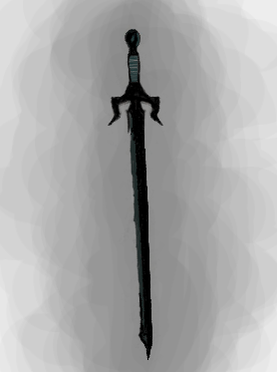 Dutenebra has no luster. In its place is an absorbtive, oppressive darkness.

This blade carries an oppressive and chilling darkness; an attuned wielder can manipulate its aura.

Dutenebra requires a ritual to attune it to its wielder. Without this ritual, the weapon feels dreadfully heavy, imposing a -4 to attack rolls, but otherwise functioning as a greatsword.

Once attuned, the weapon functions as a +4 Unholy Greatsword. In addition, as a swift action, the wielder may morph the aura of darkness to have one of three effects:

- Create an area of low light within 50 feet of the blade. If conditions were already low-light, this area now functions as non-magical darkness.
- Wielder gains a +16 bonus to hide checks made to hide in shadows.
- Strikes with the weapon leave blackened gashes which spread, dealing 1d6 damage each round until the victim makes a Fortitude save (DC = 18 + wielder's Charisma modifier).

The blade maintains this effect until another swift action is spent to change it.